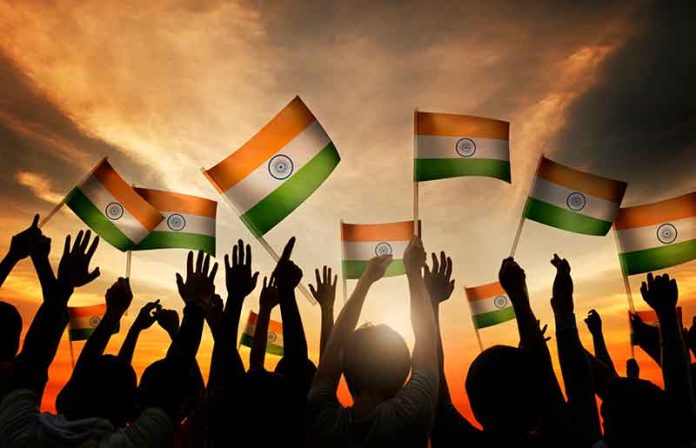 Its independence from British colonial rule followed a complex process, including Partition: the division of India into Muslim-majority Pakistan and Hindu-majority India. Partition displaced tens of millions of people and caused loss of life and property that remains in living memory for many.

India’s future remained unresolved for over two years after Partition. While the country attained its independence on Aug. 15, 1947, it only became a fully sovereign republic with its own head of state on Jan. 26, 1950.

Between those dates, the 299 men and women of India’s Constituent Assembly worked to imagine their emerging country and to inscribe their vision and foundational legal principles in a national constitution. The outcome of their efforts is a remarkable document that remains a source of both inspiration and contention today.

Here are a few things to know about the Indian Constitution.

At the time it was adopted in 1949, the Indian Constitution contained 395 Articles and had approximately 145,000 words. The only longer written constitution belongs to the state of Alabama, where I currently live and teach law.

By comparison, the U.S. Constitution – generally considered the world’s oldest national charter – originally contained just seven articles and around 4,200 words. The world’s shortest constitution belongs to its second-smallest country, Monaco. It has just around 3,800 words.

When the Indian Constitution was ratified, constitutions were not as common as they are today. India’s was just the world’s 23rd national constitution. In comparison, Pakistan didn’t ratify its constitution until 1956.

Consequently, ratification was itself a major achievement. In societies like India with many deep cultural, religious and socioeconomic divides, the process of drafting and ratifying a shared founding document can serve a valuable symbolic function.

Some countries, faced with the challenges of drafting a constitution for a deeply heterogeneous population, never agree on a single, unifying document. Israel is one example.

Because constitutions were still relatively rare in the 1940s, India’s Constituent Assembly’s Drafting Committee sought inspiration wherever it could.

The committee chairman, B.R. Ambedkar, drew on his education in the U.S. and United Kingdom. Advisor B.N. Rau traveled in the fall of 1947 to Canada, the U.S., Ireland and the U.K. to learn from their experiences.

Rau even indicated which country had inspired each element of the draft constitution he prepared for the Assembly. For example, India’s 1947 constitution did not contain a “due process” clause like its American counterpart: U.S. Supreme Court Justice Felix Frankfurter had warned Rau that due process would give Indian courts too much power to overrule legislation, while simultaneously imposing a heavy burden on the judiciary.

India’s constitution does, however, contain non-justiciable “Directive Principles.” The term non-justiciable means these constitutional provisions cannot be enforced by courts. This feature was borrowed from the Irish Constitution of 1937 to give lawmakers and judges a set of values to keep in mind.

Today, India’s Constitution is among the most amended in the world. It has 105 amendments with the last one passed in August 2021.

Easy change was intentionally encoded into the Indian Constitution. “[T]here is no permanence in Constitutions,” declared India’s first Prime Minister, Jawaharlal Nehru. “There should be a certain flexibility.”

Consequently, Article 368 only requires that a sole member of parliament propose a bill to change the constitution and that parliament approve proposed changes by a simple majority to pass them.

Easy change is credited with being one contributor to the Indian Constitution’s longevity, which at 75 years old far exceeds the global average lifespan of 17 years. In Asia, only two other countries that gained independence soon after World War II still have their original constitutions: Taiwan and South Korea. Thailand, by contrast, has had around 20 constitutions since 1932.

The Indian Constitution has several other elements that are remarkable – for better and for worse.

Article 17 responded to widespread and debilitating caste discrimination by abolishing untouchability – the practice of segregating and persecuting certain groups because they are considered “impure” – “in any form.”

And Article 21, protecting life and personal liberty, has directly contributed to Indians’ right to a free, public elementary education and was cited in the Indian Supreme Court’s 2018 decision to decriminalize consensual same-sex conduct.

Other parts of the Indian Constitution, such as a provision on preventative detention that allows the government to imprison people before they commit a crime, have prompted considerable criticism from scholars, activists and lawyers.

Finally, some features of the Indian Constitution are unusual, but not necessarily good or bad.

The constitution has two provisions on religious freedom. Article 25 establishes “the right freely to profess, practise and propagate religion” to all persons. That is, the article grants individuals religious freedom. More unusually, Article 26 recognizes “religious denomination[s]” as also having specific rights regarding property, institutional management and “matters of religion.”

Those two rights – the individual and the collective – often conflict, as my research on the high-profile dispute over women’s access to the Hindu temple at Sabarimala shows. What matters, when these two rights collide, is which limitations apply to Article 25 and which communities count as religious denominations for Article 26.

In 1991, after analyzing both Articles 25 and 26, a high court decided that Sabarimala could ban women at all times, despite good reasons to believe women had historically been granted entry under some conditions. Then, in 2018, the Indian Supreme Court invalidated that decision, declaring that because some women had likely always visited Sabarimala, all women should be allowed to enter. The Supreme Court’s ruling was also based on an interpretation of Articles 25 and 26.

And certain political developments, such as a controversial 2019 law that made religion a criterion for citizenship for the first time, threaten India’s status as a non-theocratic state.

When they began drafting India’s constitution 75 years ago, the 299 framers intended to create a charter that would serve all Indians, no matter their faith, caste or gender. Whether that democratic tradition continues for another 75 years will depend on whether lawmakers and judges stay true to that vision.

Editor’s note: This story has been corrected to accurately reflect the status of India’s constitution as among the most amended in the world.

This article was originally published in TheConversation on 13 August 2022. It can be accessed here: https://theconversation.com/india-turns-75-fast-facts-about-the-unusual-constitution-guiding-the-worlds-most-populous-democracy-188096

Deepa Das Acevedo is a legal anthropologist. She is a Trustee of the Law & Society Association (Class of 2024), an Associate Editor for the Law & Society Review, a Contributing Editor to the Work Law section of JOTWELL, and a member of the advisory board for Law & Social Inquiry.