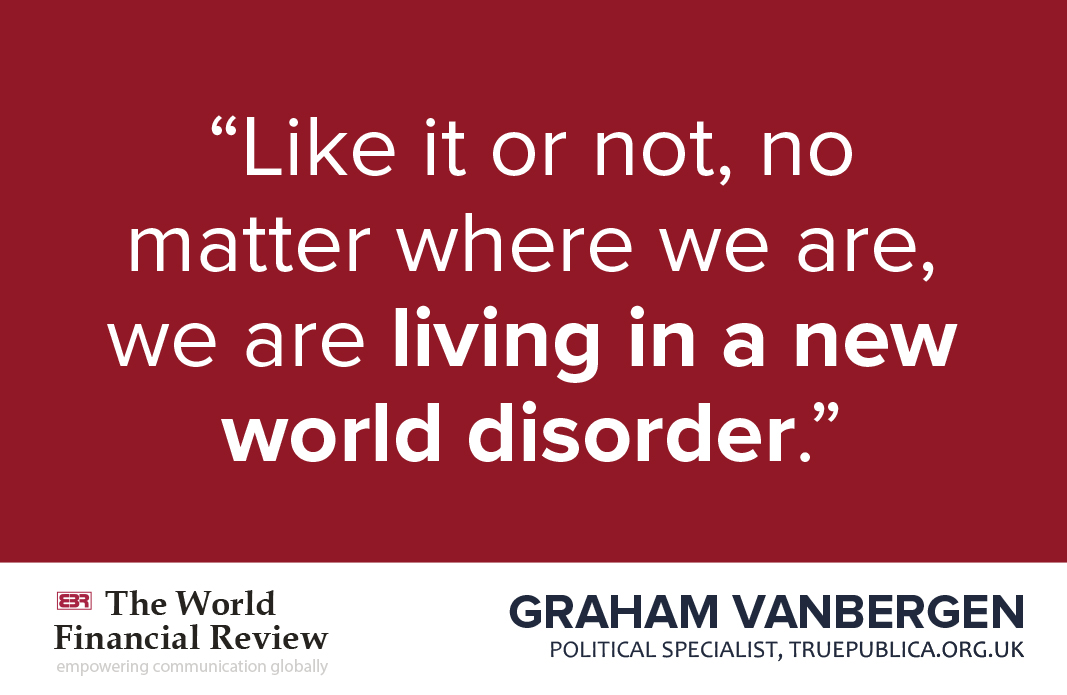 Until recently, globalisation was led by the West and benefitted only a few advanced economies. After China’s three decades of rapid growth, the Belt and Road initiatives hold potential for more inclusive globalisation.

During the weekend, the Belt and Road Forum for International Cooperation flooded Beijing with almost 30 heads of state and government leaders, 1,500 delegates from over 130 nations, and over 70 international organisations.

As the forces of globalisation are lingering in the advanced world, the Forum reflected new commitment to more inclusive globalisation, particularly by emerging and developing economies. By 2050, their contribution to global GDP growth is expected to climb from 68 percent to 80 percent.

The investment in infrastructure is likely to accelerate industrialisation and growth opportunities in nations where living standards remain low but growth potential is high.

The Forum precipitates huge investments in new roads, railways and ports while facilitating access to vital capital, goods and services, especially to those economies, that benefitted so little from the postwar globalisation. The investment in infrastructure is likely to accelerate industrialisation and growth opportunities in nations where living standards remain low but growth potential is high.

In the West, the One Belt One Road (OBOR) is still portrayed as a new plan. Yet, President Xi Jinping raised the initiative of jointly building the Silk Road Economic Belt and the 21st Century Maritime Silk Road already in fall 2013.

If the original belt reflected the ancient world economy until the Italian Renaissance, the OBOR includes countries on the original Silk Road through Central Asia, West Asia, the Middle East and Europe. It also features a maritime road that links China’s port facilities with African coast, through the Suez Canal into the Mediterranean.

The OBOR has potential to redirect domestic overcapacity and capital for regional infrastructure development to improve trade and relations with Southeast Asia, Central Asia and Europe – and over time across Americas and Sub-Saharan Africa.

The OBOR has been compared with the postwar Marshall Plan, which was designed to support the European recovery and to insulate the Soviet Union. There are parallels, but also major differences.

Presumably, the Marshall Plan was created to help rebuild economies in Western Europe for four years beginning in April 1948. While there is no consensus on exact amounts, the cumulative aid may have totalled $13 billion (some $130 billion in 2016 dollar value). These efforts pale in comparison with the OBOR, which involves far greater cumulative investments, which are currently anticipated at $4 trillion to $8 trillion, depending on timeline and scenario estimates (Figure 1). 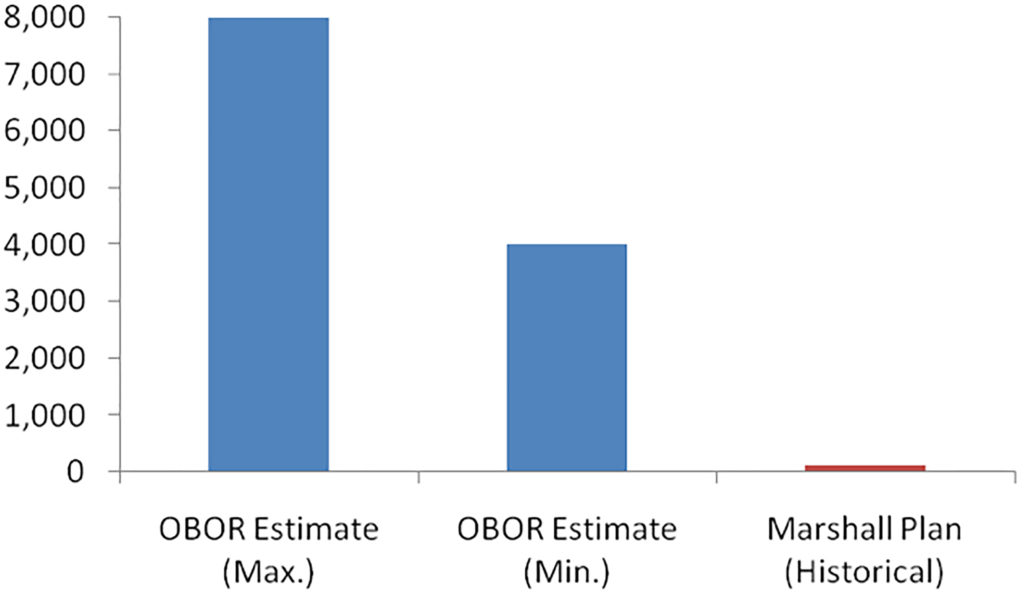 Unlike Marshall Plan, the OBOR does not predicate participation on membership or tacit support of military alliances. It is focussed on 21st century economic development – not on 20th century Cold War.

The Marshall Plan was predicated on participation in the US-led North American Treaty Organization (NATO). Historically, almost 75 percent of the total aid went to just five countries: the UK, France, West Germany, Italy, and the Netherlands, which became the NATO’s core members over time.

Today, the NATO still accounts for over 70 percent of all military spending in the world (US 38%, non-US NATO: 32%), although friction about NATO financing by members reflects underlying pressures among the founding members.

While much is made about the humanitarian aid by the West, particularly the US and Europe, it should be seen in context. In 2016, world military expenditure is estimated to have been $1,686 billion, according to SIPRI research. In turn, international humanitarian assistance reached a record high of $28 billion in 2015, according to most recent Global Humanitarian Assistance Report (Figure 2). 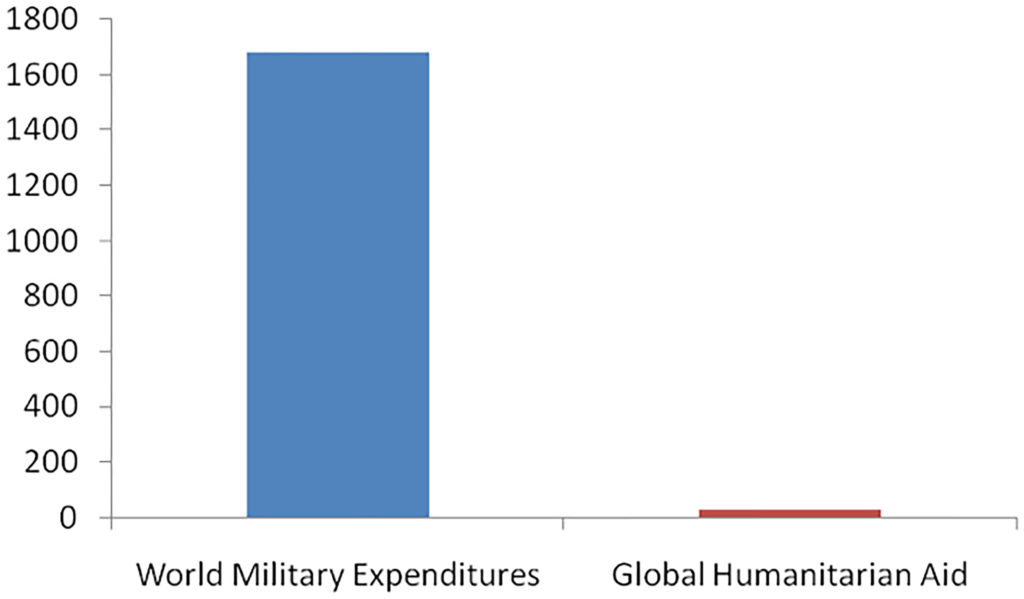 In brief, the West-led humanitarian assistance is less than 2 percent of world military expenditures, which is led by the NATO. That’s untenable over time, especially as more than 90 percent of global humanitarian aid goes to long- and medium-term recipients.

Unlike advanced economies, emerging and developing nations have neither the ability nor willingness to over-invest in military spending. In per capita terms, China ($156), India ($42), and even Russia ($481) invest a lot less than the US ($1,885), or major European economies ($500-$860) in military spending.

Moreover, China does not predicate entry to the OBOR on membership in military alliances, as the US once did. That is vital. When NATO’s rearmament replaced economic development as the West’s primary goal in the postwar era and when the Cold War divided the world, instability and economic volatility surpassed stability and economic growth in the global agenda. That benefitted mainly a few advanced economies but not the decolonising nations, which were penalised by costly conflicts that were exported to the Third World as the direct result from the Cold War.

The Belt and Road has the potential to change the 21st century – for the better.

It is these historical failures in economic development that the OBOR has potential to alleviate over time – through renewed global cooperation, the rise of more inclusive multilateral inter-governmental development banks, and new and massive infrastructure initiatives in a number of pivotal emerging and developing economies that are still amid industrialisation or the drive to industrial maturity.

The Belt and Road has the potential to change the 21st century – for the better.