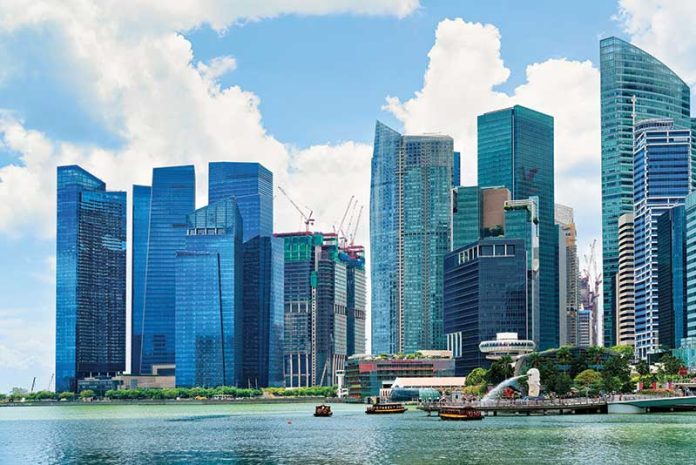 The Singapore titan’s tech-charged quest to take the banking out of banking has paid off handsomely.

The world’s best bank, it seems, has managed to outdo itself. For the fourth year in a row, Singapore-based DBS Bank has been named the “world’s best bank” by Euromoney, a leading industry publication. It also clinched the “world’s best digital bank” accolade, marking the first time the two titles are held by the same institution. While Southeast Asia’s largest bank owes its latest triumphs to bold initiatives1 launched during the pandemic, including new online exchanges for blockchain-based fundraising and carbon credit trading, its ascent to the top is built on a digital transformation years in the making.

To win over a new generation of customers, DBS saw that it needed to inhabit the same space as the tech upstarts, leveraging new technologies to take the hassle out of traditional banking. In short, it set out to make banking “joyful”.

That transformation was launched in 2014 by CEO Piyush Gupta and his leadership team. Their vision: Make Banking Joyful. An ambitious goal, considering the industry’s tarnished image after the global financial crisis as well as a growing shift towards online financial transactions. In fact, a survey2 in the United States showed that 71 percent of millennials would rather go to the dentist than their local bank branch, and three in four preferred financial services from the likes of Google and Amazon.

The threat from tech was impressed upon Gupta during a meeting he had earlier in 2014 with Jack Ma, then CEO of Alibaba. That one-hour meeting convinced Gupta of the disruptive forces emerging from China that would revolutionise banking.


To win over a new generation of customers, DBS saw that it needed to inhabit the same space as the tech upstarts, leveraging new technologies to take the hassle out of traditional banking. In short, it set out to make banking “joyful”. This vision would be built on three strategic principles: become digital to the core, make DBS “invisible” and create a “30,000 people start-up” culture. 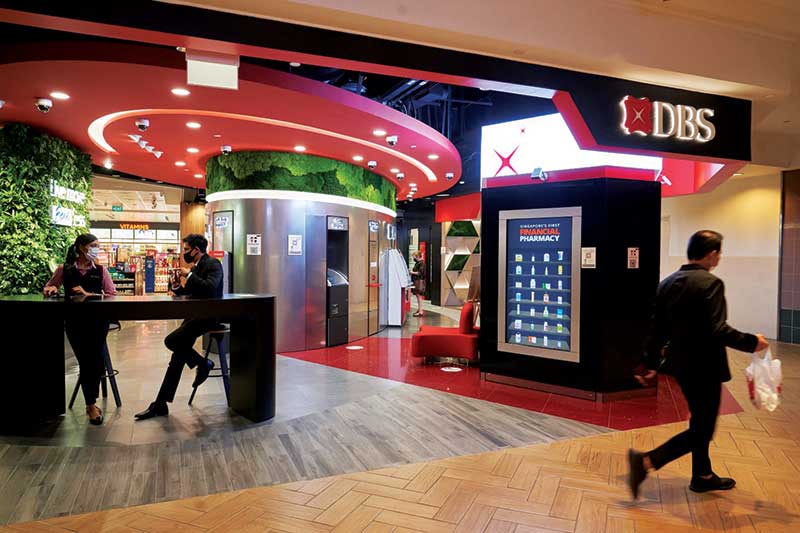 Becoming digital to the core

Part of DBS’s success is built on its creativity in overcoming digital transformation challenges that other organisations struggle with. Two out of three digital transformations fail3 at least in part because executives underestimate the project’s scope and impact. DBS’s top executives decided right from the start that emerging technologies and use of data had to be incorporated throughout the bank, with alignment across all divisions.

To encourage employees to think like techies, and not just any techie but Jeff Bezos, Amazon’s famously customer-focused boss, DBS adopted the phrase, “What would Jeff do?”

The transformation quickly bore fruit. First, DBS dramatically reduced the time-to-market of new products. For example, in 2016 it launched the first digital-only bank in India through a mobile app that it fed with weekly updates. By the following year, the digibank had added more than a million customers4.


DBS also built ecosystem partnerships5, an essential strategy in a hyper-connected world. Most recently, the bank teamed up with fintech firm Doxa6 to launch an automated payment solution for Singapore’s construction industry, which accounts for 4 percent of the country’s economy. It aims to help contractors improve cash flow management and cut costs by digitising paperwork and tracking payments automatically.


Transformations, however, are never easy. For DBS, an initial challenge was to start solving problems by thinking like “techies” rather than bankers. Its solution? Proclaim itself “a technology company delivering banking services” and benchmarking not against other banks but leading technology companies. To encourage employees to think like techies, and not just any techie but Jeff Bezos, Amazon’s famously customer-focused boss, DBS adopted the phrase, “What would Jeff do?”


It also distilled lessons from leading technology companies with the catchy mnemonic “GANDALF”, after the wizard of The Lord of the Rings fame: G — use open-source software like Google; A — run software on Amazon’s cloud platforms; N — use data and automation at scale and personalise recommendations like Netflix; A — design systems as Apple does; L — push for continuous learning in the footsteps of LinkedIn; and F — focus on building communities like Facebook.  What about ‘D’? That’s for DBS, of course.

At DBS, customers come first, followed by employees, then other stakeholders. Gupta believes that putting the customer first provides a unifying purpose for employees. The bank adopted customer journey mapping – a method of visualising the customer’s interaction with the bank from his or her perspective –  and made it the default tool for solving customer issues. The bank also used hackathons and design thinking processes to help employees become customer-centric.


In 2017, DBS launched7 a developer platform of APIs, the software protocol that allows computers and apps to communicate with one another. The platform enables software developers to “communicate” with DBS and link up with the bank’s services, such as a peer-to-peer service payment and mortgage affordability assessments. Today the network has over 1,000 open APIs. For instance, cars can now be bought and sold on the bank’s platform, with DBS car loans integrated seamlessly into the system. The bank becomes “invisible” to its customers while meeting their needs. 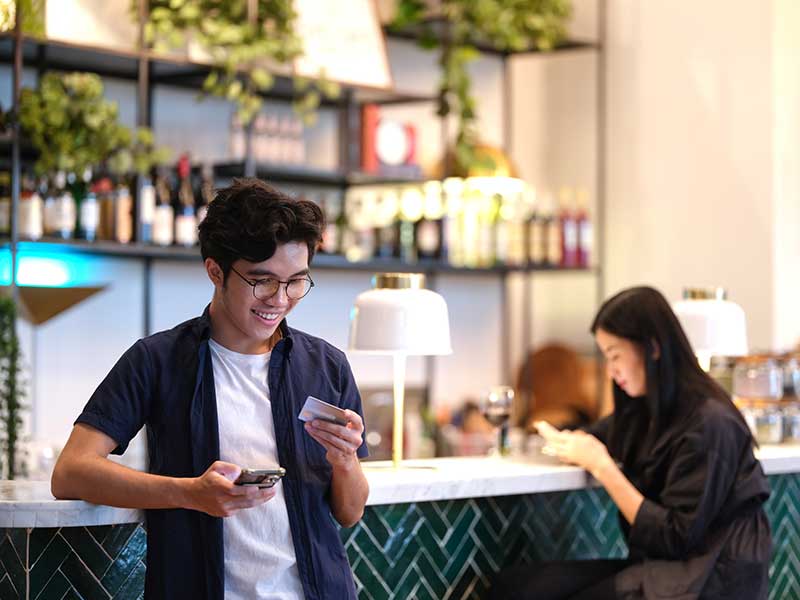 A question DBS’s leadership asked early in the bank’s digital transformation was: “What is the biggest roadblock to adopting a start-up culture?” It turned out that it was the way meetings were conducted, a scourge common to many large, complex organisations. There were too many meetings, and too many of them were ineffective or had no stated purpose.


Part of DBS’s success is built on its creativity in overcoming digital transformation challenges that other organisations struggle with.

Enter “MOJO”, short for Meeting Owner Joyful Observer, a campaign to do away with meetings that went nowhere. It had a simple rule: Meetings must start and finish on time and have a fixed agenda. MOJO produced serious benefits, saving the bank more than 500,000 employee hours.


To develop a start-up culture, the leadership team cultivated five characteristics throughout the organisation: agility, continuous learning, customer obsession, data-driven experimentation and risk-taking. Last year, as the pandemic raged, the bank created a task force on the future of work. Today, employees have the flexibility to work from home up to 40 percent of the time. For those who need flexible work arrangements, the bank offers a job-sharing scheme that divides a typical full-time job between two employees.


Meanwhile the bank is accelerating its transition from conventional functional departments to project-specific, data-driven agile squads, made up of members from different functions with relevant areas of expertise. Workspaces are also being redesigned.

Along the way to becoming the “world’s best bank”, DBS’s revenue surged from S$9.6 billion in 2014, the year it launched its digital transformation, to S$14.6 billion last year. But it is not resting on its laurels. The bank has crafted a new vision: to be a better bank in a better world, focusing on continued digital transformation and sustainability. It aims to deliver products and services that promote sustainable development, to engage in sustainable procurement, support social enterprises and businesses with positive social impact and give back to the communities in which it operates.

Robin Speculand is CEO of Bridges Business Consultancy Int. and co-founder of the Strategy Implementation Institute and the Ticking Clock Guys. He has written five best-selling books including Excellence in Execution and World’s Best Bank: A Strategic Guide to Digital Transformation.