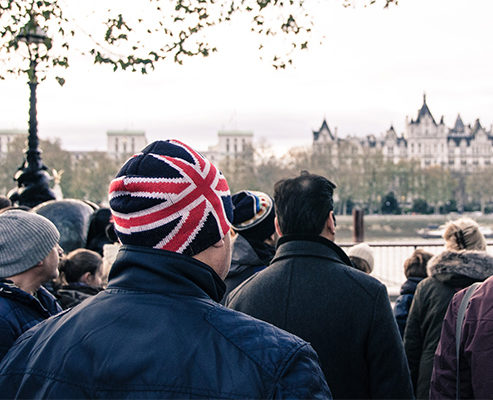 It took just twenty years to go from the euphoria of Cool Britannia to Fool Britannia in the guise of the economy destroying and politically toxic ideology of Brexit. The author explains what may be lurking around the corner in the years ahead.

Throughout most of the 1990s, Cool Britannia was a period of increased pride in the culture of Gt. Britain, which was inspired by the swinging 60s – enhanced by its modern-day youth culture. The iconography of the day was British rock and pop, fashion houses and magazines who rode on a high crest of a renewed feeling of optimism following the turbulent years of the 1970s and 80s. It was all Britpop, Euro96, and Alexander McQueen. The economy and mood of the nation were booming.

The cultural renaissance of London, in particular, was much celebrated in the press, it’s pinnacle reached with the election of Tony Blair in 1997 providing a boost to the feeling of optimism – indeed, euphoria.

In 2003, Tony Blair burst the bubble with an illegal invasion of a foreign sovereign state that saw the biggest street protests in Britain and around the world in human history.

The police, National Crime Agency and Electoral Commission are slowly unravelling the frightening realisation that Britain’s democracy, like the children’s fable, has no clothes.

Iraq cast a dark shadow on the nation and when all was said and done, hundreds of thousands of innocent civilians would be dead. The nation bowed its head in shame. It was rapidly followed by corruption scandals; cash-for-honours, cash-for-influence – culminating in the massively damaging parliamentary expenses scandal. Next came cash-for-influence, cash-for-access – the list of political skulduggery only escalated. Then there were the accusations of sexual abuse and more recently rampant racism in the form of Windrush, Anti-Semitism and Islamaphobia at the very heart of the political establishment. In between all of this – the destruction of Libya was another symbol of Britain’s desperate foreign policy decisions that humiliated the nation.

From 1996 to 2016 – a period of just twenty years, Britain has gone from crooning the ‘Cool Britannia’ brand with a beaming collective national pride to a final swansong of Fool Britannia in the Brexit endgame. National resilience, a characteristic of the British people has been replaced with acrimony and hostility.

After abandoning the moderate centre ground, civil war has broken out in both political parties on the left and right.

In this environment, should it be of any surprise that the most financially supported political figure in Britain of 2018/19 is a right-wing thug with a criminal rap sheet as long as your arm – in the guise of Tommy Robinson?1

Tommy Robinson is though a warning shot of what is to come. He was only allowed oxygen in the first place because of the democratic decay that Britain is now experiencing. But it is the method of his emergence that has to be tackled most urgently. The names SCL Elections, Cambridge Analytica, Facebook allied with the words algorithm, dark money and micro-ads make many who should be better-informed scratch their heads. The police, National Crime Agency and Electoral Commission are slowly unravelling the frightening realisation that Britain’s democracy, like the children’s fable, has no clothes.

Democratic Audit charitably put it that there has been – “active external interference through ‘election hacking’ and other, subtler, forms of meddling.” In other words, obscure wealthy donors, foreign state powers and corporations hiding behind front charities and think tanks have attacked Britain’s democracy – and won.2

Today, Britain has a Prime Minister, who, with each new broken promise increases the loss of political capital that took centuries to build.

Every day, the public is now witnessing the unseemly spectacle of Cabinet ministers expressing fraudulent pledges of loyalty to the PM while vigorously fine-tuning their leadership campaigns, with others deserting the posts to which they were elected.

This has exposed nothing more than the pretence that politicians were acting in the national interest and it has led to a degenerating spiral of growing hatred in society through identity politics, finger pointing and shame-blaming.

Britain is unquestioningly marching in lockstep with a political and economic model characterised by moral bankruptcy, avarice and inevitable decline.

At the time of writing, Britain is facing a no-win political dilemma so bad that the government is preparing for a likely repeat (but of a much-intensified version) of the 2011 England riots, which saw looting, arson, and mass deployment of police that ended with £200 million of property damage alone. Its preparations include seconding and recruiting thousands to a new department to determine the ‘battle rhythm’ on the streets of Britain.3

It is also preparing for the genuine threat that violence will emanate from Northern Ireland once again. Almost one-quarter of the domestic surveillance agency MI5 has been relocated there.

It is now evident that the economy will nosedive. This week, the news came that London’s Financial Services industry had transferred nearly £1 trillion of assets to Europe in preparation of Brexit.4

Twenty years is all it took to go from a euphoric nation of optimists at the heart of the European Union project to the crash and burn casino politics of gambling the very prosperity and security of future generations without their explicit consent.

The Chinese government calls the initiative “a bid to enhance regional connectivity and embrace a brighter future”. Some observers see it as a push for Chinese dominance in global affairs with a China-centred trading network. America sees it as nothing more than a threat to its dwindling economic prospects.

The Belt and Road Initiative is the largest infrastructure and investment project in history, covering more than 68 countries, including 65% of the world’s population and 40% of global GDP.

In contrast, the New American Century was defined not by infrastructure investment to encourage economic growth, trade or cultural exchange but by military strength and global hegemony. It has already ended in disaster and Britain is unquestioningly marching in lockstep with a political and economic model characterised by moral bankruptcy, avarice and inevitable decline.

Brexit is a fool’s game, and the British people have been fooled. It forces Britain out of the biggest game on the global chessboard by default. It also forces Britain to play a game with potentially disastrous economic and geopolitical consequences being geographically located on the wrong side of the board – with our competitors next door and allies at the other end of the road.

Brexit will define Britain for decades to come. So while many may disagree with the sentiment that only bad things will come from it – it is a false hope that it will end in a new era to match Cool Britannia. In the years ahead, the EU may have many problems to deal with but they are stronger together in today’s very uncertain world.

Graham Vanbergen is the founder and contributing editor of TruePublica.org.uk, ThinkPublica, and NewsPublica.com. He is also the author of BREXIT – A corporate coup d’état.