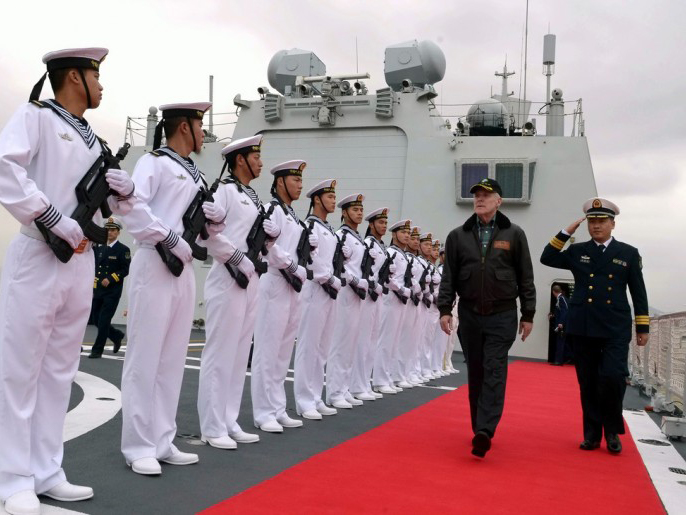 In Africa, the Trump administration is setting a precedent by replacing economic development with militarization. In Asia, it seeks to couple “rebalancing” in trade with a rearmament drive.

In a recent editorial, The Manila Times expressed concern that relatively benign economic conditions may lead to a false sense of security as “the United States-China trade war may be starting to inflict collateral damage on the economy.”

In the short-term, it is a valid concern for the Philippines and other ASEAN economies that currently benefit relatively benign economic conditions.

But even if the worst excesses of the trade war could be deterred, there are darker clouds in the longer-term horizon. The Trump administration’s new trade protectionism is accompanied by increasingly military stance. The new US Africa strategy heralds changes in other regions as well, particularly Asia.

Setting a precedent in Africa

In 2017, the United States had a $39.0 billion in total goods trade with Sub-Saharan African countries and a trade deficit of $10.8 billion. US investment in Africa grew in the Bush years. But in the Obama 2010s, it collapsed.

In the past, US Africa strategy focused mainly on economic cooperation and aid, and secondarily on military cooperation. In the new strategy, the focus is reversed. It downplays economic efforts to boost African prosperity. Second, it sees Africa mainly as a base of Islamic terrorism, which must be defused in the continent. Third, it will no longer support UN peacekeeping missions.

China’s Africa investment significantly exceeds that of the US. And China is a large source of aid and the largest source of construction financing, which supports Africa’s ambitious infrastructure development.

Meanwhile, China’s economic engagement with Africa has soared. In 2016, the value of China-Africa trade was $128 billion, almost three times more than US trade with the continent. Also, China’s Africa investment significantly exceeds that of the US. And China is a large source of aid and the largest source of construction financing, which supports Africa’s ambitious infrastructure development.

Perhaps that’s why US Africa strategy misrepresents China’s One Road and Belt (OBOR) initiative as a plan of “Chinese global dominance.” Since economic facts do not support the White House’s narrative, it relies on ideological trashing.

Unfortunately, similar developments loom ahead in Southeast Asia – a region that is far more important economically and strategically.

In the past decade or so, US economic engagement in ASEAN has fallen, while that of China has soared. According to US Trade Representative, US trade with ASEAN amounted to $234 billion in 2016; that’s six times more than with Africa. Yet, China trades with ASEAN soared to $515 billion in 2017.

Indeed, China trades with ASEAN (20%) almost as much as ASEAN economies trade with each other (22%). It is the same story with foreign direct investment (FDI). In 2017, China and Hong Kong accounted for some 15% of all FDI to ASEAN. US figure has plunged to less than 5% (Figure). 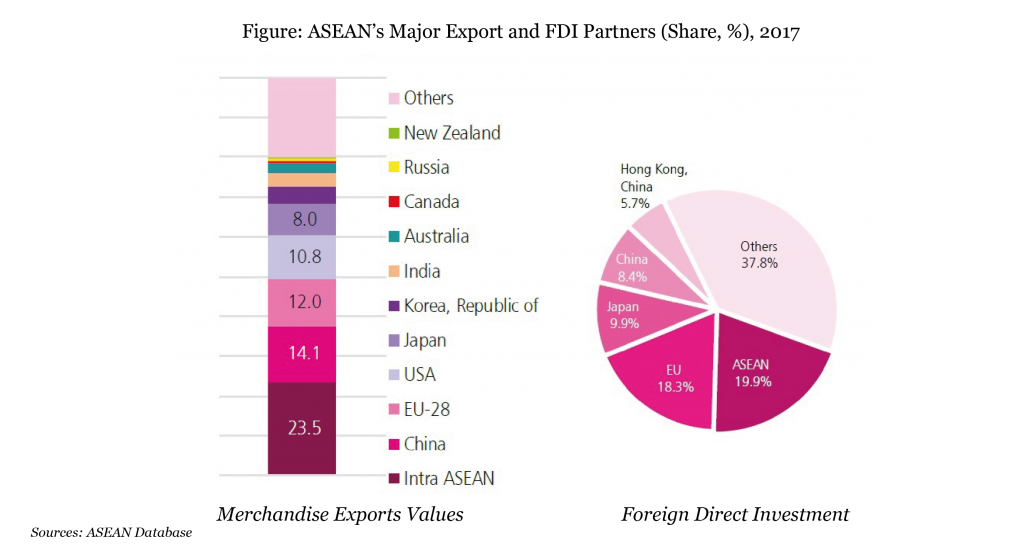 Some observers argue that the US trade war will hurt China but may benefit ASEAN, thanks to redirected trade and investment. That’s a short-sighted view. While some ASEAN countries may benefit in some sectors for some time, continued US-Sino tensions would overshadow the entire region for years to come.

Moreover, US trade with ASEAN is now subject to the ‘America First’ stance. As the Trump administration puts it, “we need ASEAN to do more for us.” The White House seeks “rebalancing” in ASEAN trade ties. It wants to negotiate deals bilaterally with each ASEAN economy – to maximize its leverage.

The US has a combined trade deficit of $92 billion with ASEAN countries; that is higher than its deficit with Mexico ($71bn), Japan ($69bn) or Germany ($65bn) – all of which have already been hit by the Trump administration’s new protectionism.

The US has a combined trade deficit of $92 billion with ASEAN countries; that is higher than its deficit with Mexico ($71bn), Japan ($69bn) or Germany ($65bn) – all of which have already been hit by the Trump administration’s new protectionism.

In ASEAN, the first targets will be those countries with which US has major trade deficit; i.e., Vietnam ($34 billion), Malaysia ($24 billion), Thailand ($20 billion) and Indonesia ($13 billion), followed by the Philippines and Cambodia. Some will seek exemptions, but they require strategic favors that may prove even costlier over time.

The drive to militarize ASEAN

U.S. overall stance toward the ASEAN is changing. Ever since Obama’s security pivot to Asia, Pentagon has been aiming to move 60% it’s warships into the region. The White House has revised its stance accordingly. In the new 2017 National Security Strategy, China is portrayed as America’s “adversary” rather than a partner.

An enemy – real or perceived – is vital for arms sales.

In 2017, military expenditure in Africa was $43 billion (SIPRI). In Asia and Oceania, it amounted to $477 billion, which is almost 11 times more. Southeast Asia alone spends on arms almost as much as Africa.

Pentagon already dominates sales to Australia, Japan, South Korea and Taiwan. Among the greatest arms importers in Southeast Asia, Indonesia buys a third of its military imports from the UK and US; Singapore more than two thirds from the US.

Pentagon wants more deals with Vietnam (which favors Russia), Thailand (which relies on Ukraine and China), and Myanmar (which prefers China and Russia). Outside ASEAN, US wants to sell more to India (which relies mainly on Russia).

An enemy – real or perceived – is vital for arms sales.

As US economic engagement has fallen in the region, rearmament would offset the losses – but that can only happen at the expense of ASEAN’s economic future.

Ultimately, the White House’s changing stances toward Africa and Asia stem from the neoconservative Wolfowitz Doctrine, which in the early ‘90s deemed that the US goal must be “to prevent the re-emergence of a new rival, either on the territory of the former Soviet Union or elsewhere that poses a threat.”

Destabilization and rearmament are the best way to undermine the quest for Asian Century. Catch-up growth and rising prosperity are not viable without peace and stability.

That’s why, like US Africa strategy; American ASEAN strategy is likely to seek to militarize Asia Pacific, which has potential to divide the region. In both regions, the White House seeks to drive rearmament, mainly at the expense of economic development that China promotes. And in both regions, the White House shuns peace-keeping activities in which China is the world’s leading actor today.

Yet, what ASEAN needs is economic development. Destabilization and rearmament are the best way to undermine the quest for Asian Century. Catch-up growth and rising prosperity are not viable without peace and stability. 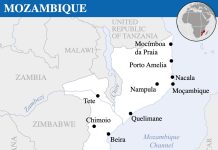