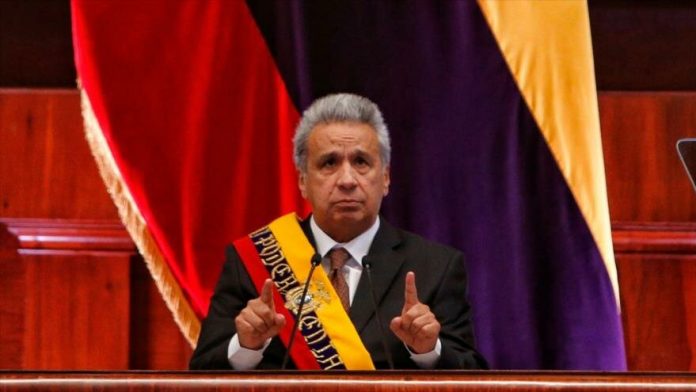 In Ecuador, the fight against IMF austerity measures is far from over. Just a few hours after my article was published on Sunday, 13 October, Ecuador  – and the IMF’s Killing Spree – https://www.globalresearch.ca/ecuador-imf-killing-spree/5691857, President Lenin Moreno declared the infamous Decree 883 was canceled, i.e. the astronomical price increases for fuel were reversed, the (police) state of emergency and curfew were called off. He wanted to put an end to the 11 days of protests with police and military induced violence.

The police, supported by the army carried out repression during the protests, like they have not been seen in Ecuador’s recent history, claiming at least 7 death, about 1,340 injured and more than 1,100 arrested. The streets of Quito were an absolute chaos; destruction, fire, tear gas, smoke.

Austerity measures, other than an exorbitant hike in fuel prices, included shrinking government spending, laying off 23,000 state employees, privatization of social services and infrastructure – and more – all linked to the IMF loan of US$ 4.2 billion. These measures were apparently also “canceled”. At least, so it looked and sounded at the outset.

This seeming victory was achieved largely thanks to the indigenous movement, the Conaie (Confederation of Indigenous Nationalities of Ecuador) – an umbrella organization of indigenous groups across Ecuador. They have relentlessly fought for their rights and against the ferocious abrogation of all the social benefits they acquired – finally – during the ten years of Rafael Correa’s socialist government – which served, and still serves, as an example for much of Latin America.

Peter Koenig is an economist and geopolitical analyst. He is also a water resources and environmental specialist. He worked for over 30 years with the World Bank and the World Health Organization around the world in the fields of environment and water. He lectures at universities in the US, Europe and South America. He writes regularly for Global Research; ICH; RT; Sputnik; PressTV; The 21st Century; Greanville Post; Defend Democracy Press, TeleSUR; The Saker Blog, the New Eastern Outlook (NEO); and other internet sites. He is the author of Implosion – An Economic Thriller about War, Environmental Destruction and Corporate Greed – fiction based on facts and on 30 years of World Bank experience around the globe. He is also a co-author of The World Order and Revolution! – Essays from the Resistance.
Peter Koenig is a Research Associate of the Centre for Research on Globalization.