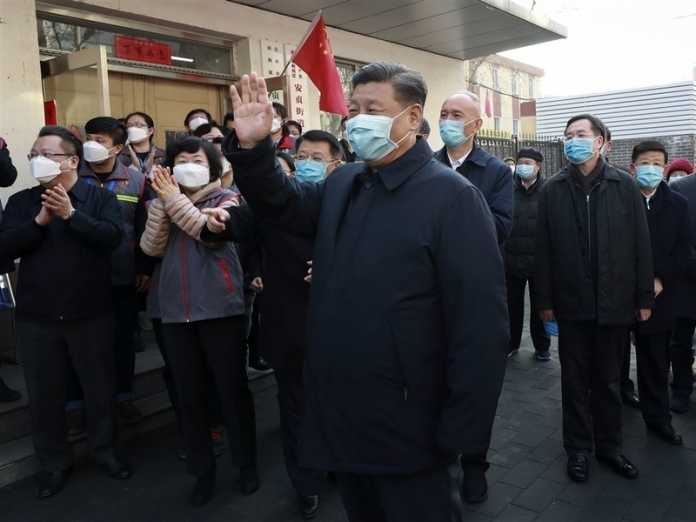 Many countries are still focusing on taking measures to counter Covid-19 as the pandemic continues to ravage the whole world. That being said, it is also quite obvious that China’s relationship with the West is suffering even more by the day, particularly its relationship with the U.S., given both countries are dealing with a situation far worse than the trade friction. Based on the events that have transpired, it looks like China’s tension with the U.S. and many European countries are taking a turn for the worse.

A part of the reason for that stems from the severe impact the pandemic has towards the U.S. and Europe. As of April 22, more than 2.51 million confirmed cases and 175,000 deaths were reported worldwide, with both countries becoming the world’s hardest-hit countries. The death toll in the U.S. alone exceeds 45,000 while Spain, Italy, France, Germany, and the United Kingdom collectively experienced a death toll exceeding 90,000. Additionally, the number of unemployed people in many states (or countries) across the U.S. and Europe has reached tens of millions. Put simply, the world’s two largest economies are experiencing the worst economic depression since World War II.

As a country that has experienced the pandemic firsthand, China knows the countries’ plight all too well. Losing the lives of more than 100,000 people and suffering immeasurable economic losses in a matter of two months can truly be a devastating blow to both the U.S. and Europe. To be fair, it’s perfectly understandable to see why China is receiving all the slurs, hate, complaining and questioning. As a matter of fact, there’s no denying that all the hate and skepticism being directed to China comes from the West and we are certain that the negativity will only continue to intensify as times goes on. What this also means is should China fail to respond to this appropriately, its geopolitical relations are guaranteed to suffer greatly in the future.

As such, there is a need for China to be mindful of the Western leaders’ geopolitical attitude at the moment.

American President Donald Trump’s attitude towards China speaks for itself, it screams hostility and is everchanging. During the briefing concerning pandemic work at the White House on April 18, Trump said, “It could have been stopped in China before it started and it wasn’t, and the whole world is suffering because of it”. He further warned, ” If it was a mistake, a mistake is a mistake. But if they were knowingly responsible, yeah, I mean, then sure there should be consequences”. As it stands, there are two reasons Trump will continue to pressure China. One, the Trump administration underestimated the pandemic during its early stages and was ill prepared in the areas of virus detection and protection resources, resulting in uncoordinated early prevention and control measures, and therefore leading to a disaster. In fact, Trump is being held accountable for all the mess that is happening as we speak. Two, 2020 is the year of the U.S. election. The pandemic has severely affected the U.S. economy and wiped out its 2008 employment accomplishments, which dampens Trump’s odds of winning. Faced with enormous pressures, it only makes sense that Trump would resort to a tactic of blatantly blaming and publicly attacking China as a part of his go-to political strategy

With that said, European leaders are too seeing a subtle shift in their geopolitical stance.

Previously in an interview with the Financial Times, French President Macron was asked if China’s handling of the Covid-19 pandemic has “exposed the weaknesses in Western democracies”, to which he responded, “There’s no comparison between an open society and China.” Macron added, “given these differences, the choices made and what China is today, which I respect, let’s not be so naive as to say it’s been much better at handling this”. He added that, “there are clearly things that have happened that we don’t know about”. Meanwhile, German Chancellor Angela Merkel has recently made similar demands towards China. According to some reports, Merkel urged China to be as transparent as possible throughout the pandemic; the more transparent China is about the source of the novel coronavirus, the more beneficial it is for the whole world.

Dominic Raab, the British politician serving as First Secretary of State as well as Secretary of State for Foreign and Commonwealth Affairs, also voiced his doubts about China and mentioned the it will have “hard questions” to answer over the virus’s origins and whether it could have been curbed earlier.

In an interview with Australian Broadcasting Corporation on April 19, Australian Foreign Minister Marise Payne expressed her concerns over China’s transparency over Covid-19 and that the country should be called in for a non-WHO led “independent international inquiry” on the origins of the pandemic. While she did not comment on China’s transparency in handling the epidemic directly, she stressed that trusting a country is based on long-term relationships and that all major countries in the world should uphold transparency. Prior to that, Peter Dutton, Australia’s Home Affairs Minister, even said that the way the world interacts with China needs to be re-evaluated to some extent.

While China has answers to the international community’s questions and certainly holds the right to refuse any calls for probe, it wouldn’t serve as a feasible solution in the long run, especially not in the face of globalization. Plagued with global issues, China cannot afford to ignore the perception the world has towards it, nor can it refuse cooperating and exchanging with other countries. During April 21st, ANBOUND noted that the Pew Research Center, an independent polling agency in the U.S.’s survey shows Americans’ negative perceptions of China continues to grow. Currently, 66% of Americans hold unfavorable views towards China, the highest recorded response since the research center begun examining the matter since 2005. By the time the Trump Administration had been established in 2017, the responses were said to have increased by nearly 20 percentage points.

To sum up the wall of text thus far, China has been facing deteriorating geopolitical relations since the start of the Covid-19 pandemic.

Despite the massive negativity that is going around, there is people who, nonetheless, remain objective in their views concerning the pandemic’s impact whilst acknowledging the risks of China’s separation from the U.S. and Europe. Robin Niblett, director of Chatham House, believes China may become the world’s largest economy by 2030 and maintains that the U.S. and Europe’s act of managing their differences with China post-pandemic is just as important as resolving the post-1945 Soviet Union conflicts both countries had. Back then, the Soviet Union was a military powerhouse and a strong competitor, though the same couldn’t be said for its economy. The decision to contain the Soviet Union was a practical, smart and ultimately right strategy. This time however, things are no longer the same, as there will be no victors in the new Cold War against China.

Bearing in mind of the possibility that China’s geopolitical relations will suffer significantly in the future, it should regard the matter with utmost seriousness and respond appropriately. To that, we would like to emphasize several key factors. One, China needs to increase the amount of pandemic support materials (PPE in particular) provided to the U.S. and Europe. Being the first country to be free from the Covid-19 pandemic, China should provide donations, expand its exports, and rely on other means to aid the disease prevention measures in other countries, especially to the U.S. and Europe, so as to help free them from the pandemic as soon as possible and restore their economies. Two, China needs to strengthen its communication with senior leaders from other countries. As a matter of fact, President Xi Jinping has been communicating and interacting with leaders from various countries, and similar activities are expected to take place on a more diverse and multi-faceted level in the near future. And finally, establish a more transparent and frequent flow of information exchange mechanism.

As Covid-19 continues to spread to the rest of the world, China’s geopolitical relations are showing signs of deterioration. To improve the state of its geopolitical relations and alleviate some pressure off it, China needs to have more information exchanges, better management of differences, and more practical support with the international community in the future.

Tax Audit Defense: Why You Should Include It In Your Growth Plan

Instagram Tips: How to Find and Grow Your Target Audience?

How Homeowners Can Become Debt-Free

Reasons To Use Cannabis As A Substitute For Prescription Drugs

How Important Is Email Marketing? 7 Points to Justify

The Easiest and Cheapest Way to Buy Shares

The Role of Educational Leaders in Promoting Social Justice in Education

8 Skills You Need For An Intelligence Career

How to Start a Credit Repair Business

How to Repair My Credit to Buy a House?

OxyContin Lawsuits: How Victims Fought Back in Court

Tips To Get Started With Forex Trading

How Brands Are Using Big Data to Grow Sales

From Femme Fatale to English Rose: Movie Quotes Every Woman Should Hear

Impact of Different Industries on Online Gambling in Africa

From Taylor Swift to BTS: Grammys 2021 Was a Much-needed Spectacle of Artistic Glory