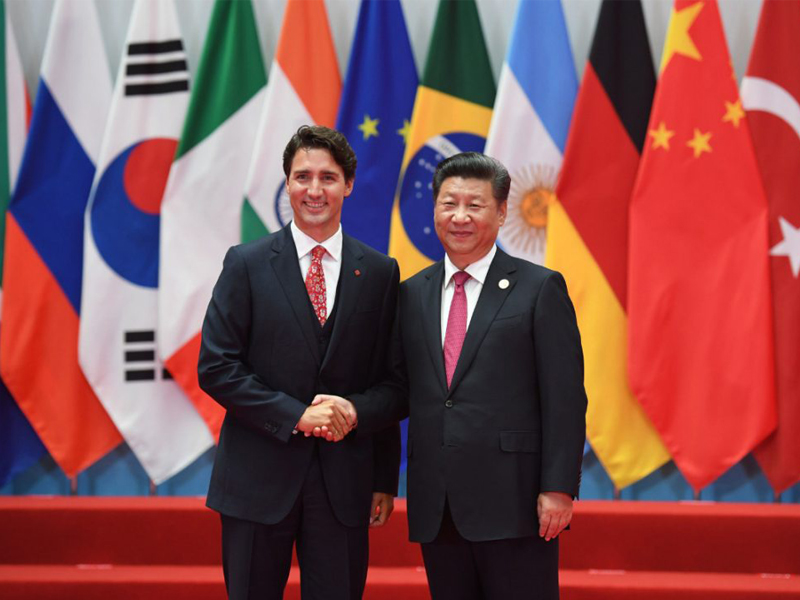 As tensions prevail in the NAFTA talks, Canada is hedging its bets by fostering consensus for a trade agreement with China.

On Sunday, Canadian Prime Minister Justin Trudeau shall start a trade and tourism dialogue with Chinese officials during his ongoing visit to China. Canada and China began to talk about a free trade agreement (FTA) more than a year ago, following back-to-back meetings of Trudeau and Chinese Premier Li Keqiang in China and Ottawa.

While Canada completed consultations on the matter, three rounds of exploratory talks were held between the two sides from February to August.

Trudeau’s visit takes place after the fifth round of talks over the North American Free Trade Agreement (NAFTA) ended in Mexico City amid simmering tensions.

If the US withdraws from NAFTA, that would start a six-month legal process before official termination. While the Trump administration may see this as a negotiating tool to force Canada and Mexico to accept its demands, the latter could use the time to complete trade talks with Brazil and the European Union (EU).

Canada and Mexico are hedging their bets against a potential NAFTA collapse by pushing for deals with new partners, particularly with China and some other Asian countries.

Last year, the combined investment from China and Hong Kong in Canada soared to $26.4 billion, which is almost half of Asia Pacific investment in the country. But since the starting-point is low, China was only the eighth largest investor in Canada.

Canada’s former China ambassador Howard Balloch believes that Canada “should be able to negotiate with China” during the NAFTA talks. Canada has a “huge interest” in China and trade diversification whatever the outcome of the NAFTA talks.

With a population of more than 1.3 billion, China is perceived as a lucrative market for Canada’s agriculture and natural resources sectors. Last year, Trudeau’s cabinet approved the Trans Mountain pipeline expansion mainly to improve Canada’s ability to get oil to China.

However, there is an intense debate over the proposed FTA with China. While Trudeau’s Liberal Party supports greater bilateral trade, Conservative leader Andrew Scheer opposes a bilateral FTA. Relying on the “China threat” card, Conservatives have criticised the Liberals for allowing Chinese takeovers of Canadian businesses, while taking advantage of Canadian concerns about human rights and environmental standards.

What about ordinary Canadians? Asia Pacific Foundation’s polling suggests that a slight majority of 55 percent might support a Canadian-Chinese FTA, but UBC’s recent poll indicates that 70 percent of Canadians support the idea and only 20 percent are against it.

Such a shift would reflect greater economic interest in a bilateral trade deal – but also growing concern about the Trump White House, rising US protectionism and the potential NAFTA collapse.

China is seen as doing more to “maintain peace” than the US and two-thirds of Canadians believe China will be the “largest economic power” by the 2020s.

While US officials have sought to subdue NAFTA tensions by extending the timetable for renegotiations that may only pour oil on the simmering fire. In Mexico, tight elections in mid-2018 will complicate the NAFTA talks; in Canada, conservatives are positioning for the 2019 elections.

Nevertheless, Canada is losing its faith in the US. According to UBC, 36 percent of Canadians believe the US is a “more responsible global leader” than China (28%). Yet, 37 percent of the citizens are “uncertain” about the matter. Moreover, China is seen as doing more to “maintain peace” than the US and two-thirds of Canadians believe China will be the “largest economic power” by the 2020s.

Amid the new uncertainty, Canada is likely to do what it can to sustain NAFTA over time, while – at least under Trudeau – it is likely to seek a trade deal with China that would foster diversification, new investment at home and greater presence in Asia.

From China’s standpoint, a bilateral deal with Canada would open new doors to North America and pave way to the Free Trade Agreement of Asia Pacific (FTAAP), which would be broader and more inclusive than the current trade pact efforts.

The original commentary was published by China Daily on December 4, 2017

The author is the founder of Difference Group and has served as research director at the India, China and America Institute (USA) and visiting fellow at the Shanghai Institutes for International Studies (China) and the EU Center (Singapore).