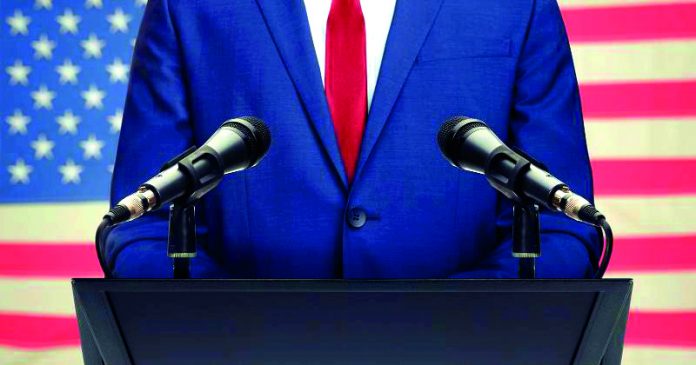 Military leaders often provide what is called “Top Cover” flying above their followers to ensure their mission is a success. Submarines travel with pilot ships to guide them. This is what corporate leaders need to do. The purpose of this article is to answer the question “Can political leaders and corporate leaders lead the same way?”

There are various issues and considerations existing in the leadership literature as the core of the criticism in the literature is that organisations of all sorts (corporations, government agencies, and non-profit organisations) tend to be over-managed (and, in some cases, over-administrated) and under-led.1 Reading all the books on leadership today will cover the gamut of Shakespeare to Geronimo. Not to say that these authors, leaders, and thinkers do not have anything good to say about leadership. It is just that the plethora of leadership literature has sent mixed signals to political and corporate leaders.

When thinking of leadership and politics, a leader has to be a politician but a politician does not always have to be a leader. In American politics in 2016, a crucial year between the democratic and republican parties, this presidential election has shown that there is a direct connection between politics and CEOs, who at least think they are experienced enough to hold the ultimate leadership position. Political leaders are not any different than organisational businessmen. More and more business men and women are becoming political candidates and people are responding positively. The reason being – the two do go together. At the heart of leadership are a large amount of followers. Without the support of followers, leaders will fail. The same thing goes with the political candidate that has to win the hearts and minds of the followers to get elected.

There are many more followers than there are leaders and this is more so in the political realm. The question is: Can political leaders and corporate leaders lead the same way? The answer is a resounding “Yes.” For example, Eisenhower, one of the former presidents of the United States in World War II, effectively led both American government and the Allied Forces in Europe in defeating Adolf Hitler. Hitler has been posited as a charismatic leader as he converted many brilliant people to follow him but the difference with his leadership style is that he represents the “Black Hat” of leadership. A leadership status that is not only a failing platform but one that represents destruction as opposed to innovation and expansion. Barring the Hitler-type charismatic leaders, there is hope for leadership at the political level.

Eisenhower’s leadership provides lessons for CEOs in today’s organisational challenges. Eisenhower argued that leaders must care for their people as individuals, always remain optimistic, and place themselves with and for the people, and, most importantly, provide the WHY behind what you ask them to do.

Politics and corporate leadership may merge today. After WWII, leadership theoretical models at Ohio State and the University of Michigan studies stemmed from research based on military leaders and their followers. This was mostly funded by the GI Bill that helped many soldiers pursue academic degrees. Leadership has a critical role in politics because we elect leaders and not politicians.

Therefore, leaders fundamentally affect the way a government performs its functions. Take a look at the nation’s largest health insurer, United Health Care, who out their due-diligence to shareholders, had to cut out Obama-care exchanges, in April 2016, because they were expected to lose one-billion in revenue.

Investors recognise the importance of leadership. A good leader can turn a weak business plan into a success, but a poor leader can ruin even the best plan. One example of this comes from CEO Rich Teerlink, who dramatically changed Harley-Davidson in the 1980s, and fundamentally built a different organisation that still prospers today. The success of leadership at the Harley-Davidson Corporation has stood the test of time. For example, Harley-Davidson’s leadership created a more effective organisation built upon three primary principles, focusing on people, challenging norms, and continuing to fundamentally change.2 At Harley, every employee can participate in leadership decision-making.

Another example of business leaders in a highly competitive environment is Steve Jobs, former leader of the Apple, who built a highly effective organisation through taking a change-oriented leadership approach, which highly manifested itself in talent, product, organisation, and marketing.3 As a result, leadership, being the core of management, is crucial to company’s success–both from a performance and management level.

The evidence from these examples suggests that leadership is highly demanding at the corporate level. For organisations to achieve a sustained change and eventually a higher degree of efficiency and effectiveness, selecting a great corporate leader is the key to success. In the absence of leadership, organisations lose their required direction to achieve a high degree of hypercompetitiveness, and cannot implement successful change in order to adapt with today’s global business environment.

As corporate leaders attempt to manage people they find that intellectual capital is the in the forefront of success – Bill Gates once mentioned that if he lost his top 50 people that he would not have an organisation anymore. Corporate leaders develop organisational communications aimed at providing valuable resources for all organisational members. They enhance knowledge sharing among intellectual capital and stipulate knowledge to be shared around the organisation. Sharing the best practices and experiences could positively impact some aspects of non-financial performance such as innovation, providing learning and growth opportunities for employees. Empowered employees can enable organisations to actively respond to environmental changes, which can in turn enhance performance in terms of return on assets and return on sales.

The outcome is success which narrows the gap between success and failure and this can be achieved by the commitment of organisational members and facilitated by corporate leader. When corporate leaders show concern for the employee’s individual needs, individuals begin to show more commitment and they become more inspired to put extra effort into their work. This extra effort improves customer satisfaction, and impacts shareholder value and improves operational risk management.

Success in politics and business can be more effective when leadership is applied to change attitudes and assumptions. Political and corporate leaders can make a fundamental change in the processes by which organisations serve their clients.

This article highlights the vital importance of leadership in both political and business areas. Success in politics and business can be more effective when leadership is applied to change attitudes and assumptions. Political and corporate leaders can, in fact, make a fundamental change in the processes by which governmental and business organisations serve their clients.

Mostafa Sayyadi, CAHRI, AFAIM, CPMgr, works with senior business leaders to effectively develop innovation in companies, and helps companies – from start-ups to the Fortune 100 – succeed by improving the effectiveness of their leaders. He is a business book author and a long-time contributor to HR.com and Consulting Magazine and his work has been featured in these top-flight  business publications.