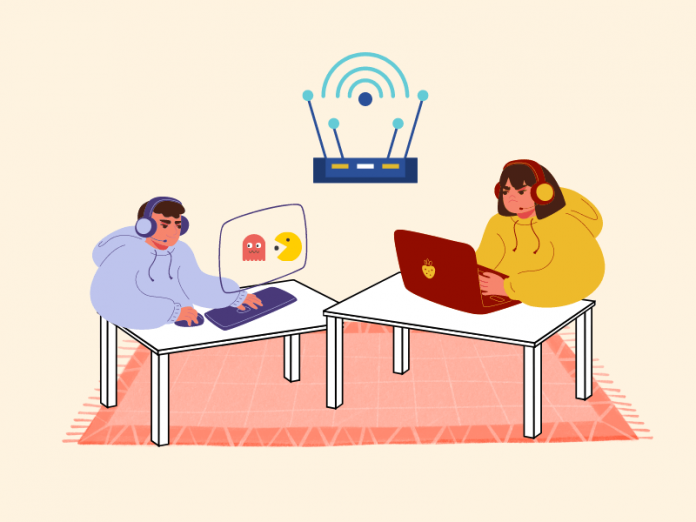 Just about every game you buy, for any platform, requires a broadband connection. Whether that’s to play online, download patches or for DRM, most games require a live connection to the internet to get the most out of them.

The type and speed of the broadband you need depends on how you play. If you’re into online shooters like Call of Duty or Fortnite, speed is everything. If you play single player titles from storefronts like Ubisoft or Steam, speed is less important than reliability.

We teamed up with Broadband Genie to take a deeper dive into broadband for gamers to better understand the unique requirements of gaming.

Why broadband matters for gaming

There are several reasons why a fast, reliable broadband connection is essential for gamers.

Most games are now digital-only – Boxed games are history. Most platforms now rely on digital downloads for all, or a significant part of new games. Call of Duty: Warzone for example was 54GB on PC and 49GB on Xbox, so a good broadband connection is essential if you don’t want to grow old waiting for a download!

Patches, fixes, DLCs and mods – Even when a game has been released, it isn’t finished. Patches, fixes, Downloadable Content (DLC) and game mods are all dependent on a good broadband connection.

Game streaming – If you use Twitch, YouTube, Caffeine, Owncast or one of the other streaming platforms, you need a fast, reliable broadband connection to play the game while also live streaming at the same time.

Online multiplayer – Arguably the most important element of gaming for some is multiplayer. Speed is essential for many online shooters and even MMOs. Ping kills online and the slower your broadband, the higher the ping. Whether you’re killed or kicked, slow broadband is an online game killer!

Cloud gaming – Cloud gaming platforms are the new way to play. Google Stadia, GeForce Now and others offer the chance to play new titles without having to buy them. Think Netflix for games and you won’t be far wrong. These services require a fast connection to avoid lag and to stream the entire game content from the cloud to your home.

Broadband for gaming – speeds and types of connection

Broadband comes in a couple of flavours depending on where you live.

ADSL – Older and slower connections that use phone lines. ADSL is usually only when fibre or cable isn’t available.

Fibre – Fibre can mean FTTC (Fibre to the Cabinet) or FTTP (Fibre to the Premises). Either way, fibre is usually the fastest option and provides a decent connection speed with low ping. Click here to learn more about fibre broadband.

Cable – Cable from Virgin Media is provided by coaxial cable to the home. It offers fast speeds (up to 1Gbps in some areas) and low ping but isn’t available everywhere.

4G/5G – Mobile broadband may be okay for certain types of gaming but it won’t work for everyone. It’s entirely dependent on signal strength and what type of game you play. Plus, most mobile broadband contracts have data caps and you could burn through your entire allocation in a single day!

When you’re gaming, faster is always better and that’s the same for your broadband. Not necessarily for connection speed, as this will often be limited by game servers or the service, but for low latency, or ping.

The lower the ping, the smaller the delay between your movement in-game and it being communicated to the game server. We have all been there when latency has been high and it seems to take an age for your avatar to dodge roll or move. That’s often down to latency.

A note on gaming broadband

Technically, there is no such thing as gaming broadband. It’s a marketing term for broadband packages designed to appeal to gamers. The packages may include inducements to benefit gamers but the broadband itself uses exactly the same network, connection and technology as standard broadband.

If you like the special features, gaming broadband may be a good idea. Just don’t be seduced by the marketing!

Do you need a gaming router?

You’ll see dozens of gaming routers advertised online. They are a bit like gaming broadband. Most of them are standard routers marketed specifically to appeal to gamers.

They use the same technology, have the same WiFi speeds, the same firmware and the same hardware as standard routers.

If you have a good router already, there is no need to buy a specific gaming router. If you have an older router or one from your ISP, you may benefit from a newer model.

New routers offer new firmware, faster hardware, compliance with new faster WiFi standards and perhaps better security but they aren’t always necessary if you already have a good one.

If you’re having issues with your broadband, here are a couple of simple fixes to common problems.

High ping or lag – Check who else in the house is using the internet and make sure they aren’t downloading while you’re gaming. Also, change game server (always choose servers closest to your location), shut down unnecessary processes on your device or reboot your router. All can fix high ping.

Slow WiFi – WiFi isn’t great for gaming unless you’re using the latest 802.11ac or 802.11ax standard, but you can troubleshoot by testing your signal using a WiFi analyser app, moving closer to the router or using a signal booster.