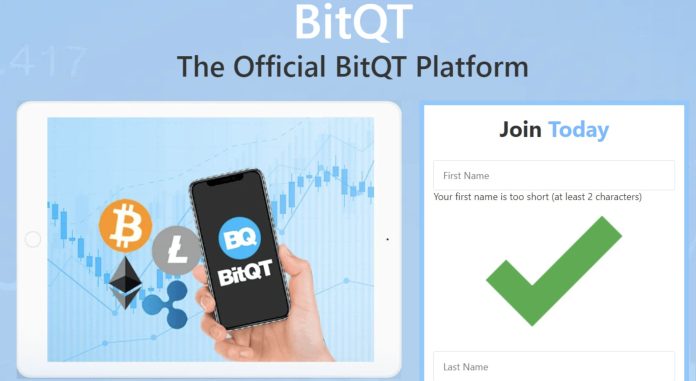 Whether you really need a crypto trading bot depends on a number of factors. However, after investigating the BitQT trading bot, we found that, in this case, none of those factors matter. Unfortunately, like many other offerings, BitQT is an obvious scam, that you definitely do not need.

In the article, we’ll go through all the key evidence we unearthed. While none of the red flags constitute proof on their own, together, they make quite a compelling case that leaves no room for doubt. Buckle up, as we’ve got some bad guys to bust.

BitQT is evidently part of a larger trend that’s currently plaguing the cryptocurrency industry. While we don’t know just how many different scammers or groups are involved, we do know that there are dozens and dozens of fraudulent trading bots out there. And they all, more or less, work in the same way, whether it’s BitQT, 1k Daily Profit, Bitcoin Champion, etc.

According to victims’ accounts, after registering an account with one of these ‘bots’, you can expect to receive incessant phone calls from the scammers. He or she will try to convince you to invest and place a minimum $250 deposit, which is what they’re after. If you do so, you won’t hear from them and you won’t see the money again. And if you don’t, they’ll keep calling and being increasingly aggressive.

As corroborated by the BitQT review over on the specialized website CryptoDaily, once a scam is busted and money stops pouring in, the scammers keep using the same websites they used for previous scams; they only change the logos and bot’s name, and the scam is on again. That’s exactly the reason why BitQT has not one, but three official websites! And they all look quite similar to websites belonging to other known scams.

Let’s now take a look at the actual content of BitQT’s websites. There’s quite a lot of text on there, but upon closer examination, most of it has little to do with the actual trading bot. Mostly, they go over the history of cryptocurrency, while explaining the basics of crypto trading. A lot of generalized talk, but very little about BitQT.

What they do say is that BitQT has a success rate of 99.4%, which is extremely hard to believe. None of the well-known automated trading solutions, such as Cryptohopper and 3Commas, make that kind of promises, because the underlying trading bot technology simply isn’t there yet. What’s more, BitQT is supposed to be making users a profit of $800 per day.

There’s no way this is true. And that can be proven with a bit of logic – if there was such an incredibly helpful trading bot, everyone would be using it. It would be all over the news, being worshipped as a miraculous money-making software, sent from another dimension to forever rid us of poverty. However, using BitQT will only lead to the loss of your money.

Even though everything we’ve seen about BitQT fits perfectly into the pattern of other scammy trading bots, we decided to also check user reviews. Here, we don’t count the user testimonials on the official websites, as a quick Google Lens search reveals that the con artists have used stock images and, therefore, the testimonials are almost certainly fake.

Trustpilot user reviews are even more revealing. Currently, there are two of them, with both being negative, 1-star reviews. The first one is pretty lacking in details, but the second one confirms the scammers’ well-known mode of operating. Phone calls, theft of the $250 deposit, etc.; all as expected. And if that wasn’t enough, even Trustpilot itself warns users that the company behind BitQT had received regulatory attention.

Therefore, the conclusion is obvious: you should steer clear of this scam. And in order to avoid other fake trading bots, we suggest dedicating plenty of time to research before choosing a trading bot that you want to use, with both our website and cryptodaily.no being good sources of information. Good luck!