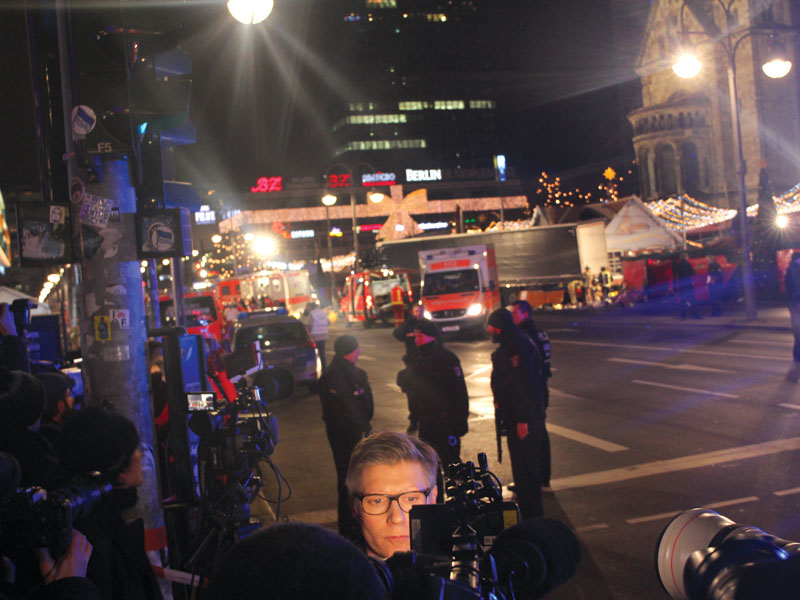 Random killing by the western secret services – 12 dead, about 40 injured, is the result of the latest false flag attack in Berlin, when on 19 December, a truck plowed into a Christmas market at Berlin’s Bretscheideplatz, near the lush Kurfuerstendamm. It’s a ‘déjà-vu’ of not even half a year ago, when in Nice, France, on 14th July a truck mowed down hordes of people celebrating Bastille Day.

In Berlin, the first “culprit” was a Pakistani who apparently “escaped”. When later he turned up and explained with proof his innocence, they had to let him go. In the cabin of the truck they also found a dead man of Polish origin. He couldn’t be accused, since he was dead. Then the chase was stalled, until miraculously, about a day later, they found in the truck identity papers of a Mr. Anis Amri (24) of Tunisian citizenship. As is usual with these terrorists, they like to leave their identity behind. It seems to be part of their strategy to be caught and killed. Now, there was again a “suspect”, who could be chased, throughout Europe.

At three in the morning of December 23, again miraculously, Anis Amri turned up on a plaza in Milan, got allegedly into a confrontation with two policemen, who claimed he pulled a gun, when one of them shot and killed him. No witness, no proof. Two Italian policemen killed a young man, whom – they say – they didn’t even have a clue who he might be. They became heroes, literally overnight. Italy’s new PM, Paolo Gentiloni, thanked and congratulated them; and so did Mme. Merkel and her Interior Minister, Thomas de Maizière.

That’s what the west knows best – denigrating and discriminating, accusing innocents, to serve their purpose, sanctions for those who do not submit. In a few words: The west is a highly criminal civilization, led by murderers.

The same pattern all over again. DEAD MAN CAN’T TALK. It’s Paris (Charlie Hebdo and Bataclan); Nice; Brussels; Munich; Orlando, Florida; San Bernardino, California… all over again and again – and again. The “plowing-through-a-celebrating-crowd” idea, looks like a “winner”, a carbon copy from the 14th July massacre in Nice. At the end the designated “Muslim” terrorist is killed. No more witness.

People wake up! Your own western governments are killing you. They are using their secret services, the core of which are CIA, Mossad and MI6, with the collaboration of their homologues and elite police forces of the respective countries, where the false flag is to be perpetrated. You are the peons they need to reach their goal; you are cannon-fodder for their greed. Don’t believe one minute that your respective governments didn’t and don’t know what’s going on. They are intimate parts of these mass murders. The alleged killers – with strong emphasis on “alleged” – may be framed as Muslims, but the real perpetrators ARE NOT MUSLIMS, they are your own spineless puppet governments. They obey orders to demonise the Muslim faith and society.

Peter Koenig is an Economist and Geopolitical Analyst. He is also a former World Bank staff and worked extensively around the world in the fields of environment and water resources. He writes regularly for Global Research, ICH, RT, Sputnik, PressTV, The 4th Media, TeleSUR, TruePublica, The Vineyard of The Saker Blog, and other internet sites. He is the author of Implosion – An Economic Thriller about War, Environmental Destruction and Corporate Greed – fiction based on facts and on 30 years of World Bank experience around the globe. He is also a co-author of The World Order and Revolution! – Essays from the Resistance.