Global News on 10 August 2020 reports – “Lebanese Prime Minister Hassan Diab announced on Monday his formal resignation, and that of his government following protests and demands for change after the deadly explosion in Port of Beirut last week, saying his government will follow the will of the people for real change and transparency. Diab, in a televised speech, said the detonation of highly-explosive material warehoused in the port area of the capital for the last seven years was “the result of endemic corruption”. Diab said, “Today we follow the will of the people in their demand to hold accountable those responsible for the disaster that has been in hiding for seven years, and their desire for real change. In the face of this reality … I am announcing today the resignation of this government.”

The cabinet had already been under pressure to step down over the August 4 explosion that killed 163 people, wounded some 6,000 and left around 300,000 without habitable housing.

What the PM doesn’t talk about are the special characteristics of the blast – an explosion that produced an unusual mushroom-like cloud, a detonation causing a shock wave that registered 3.9 on the Richter scale, that shattered windows in a radius of more than 10 km, leaving construction – buildings for industry and housing – in shambles with pictures resembling those of Hiroshima after the US nuclear attack in 1945.

True. This cannot be excluded. But who could be interested? Giant real estate speculators, like banks and other financial institutions / financiers that might want to buy the devastated prime area – seaport, airport and surroundings – for pennies on the dollar and newly develop the destroyed site for business and luxury housing – it’s called privatization of disaster. Something similar happened in New Orleans after Hurricane Katrina struck the Gulf Coast on August 29, 2005. 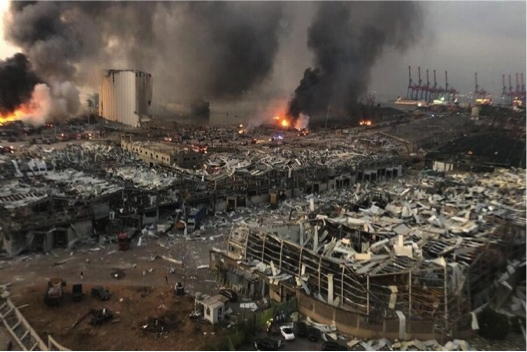 All is possible of course especially in our no holds barred free-for-all neoliberal world, and especially as France’s President Macron, a Rothschild lieutenant, came to visit the devastated area shortly after the Beirut blast. Who knows – the purpose of his offer of “aid” – aid almost always comes with strings attached – may have been preparing the terrain, so to speak, for French financial oligarchs to buy-up the harbor and the surrounding areas, for – well, as usual – pennies on the dollar.

But there are also other reasons for the “explosion” of Beirut port. Mind you, they are not at all mutually exclusive. Lebanon’s government blamed a large quantity of poorly stored ammonium nitrate for the blast that devastated the northern quarter of Beirut, killing about 250 people, injuring thousand and destroying the shelter for some 300,000 people. Ammonium nitrate is an industrial chemical commonly used around the world as an agricultural fertilizer, and in explosives for mining. These poorly managed chemicals in the warehouse existed already for at least 6 years. – Is it a sheer coincidence that it went up in flames almost to the day of the 75th Hiroshima anniversary, leaving Hiroshima-like devastation behind?

Next to the warehouse that allegedly harbored these highly volatile chemicals, was apparently also an ammunition-depot of Hezbollah’s. Could it have been the target of a deadly enemy?

Full video of Netanyahu showing Hezbollah’s arms depot, as if he were predicting what was to become the blast site at Beirut port on 4 August 2020: https://youtu.be/YXOHVkLEkgo

This is a possibility. But what about the strange explosion? – According to several journalists and observers, including Thierry Meyssan, this is a “new” bomb. It had been tested already in Syria in mostly deserted areas, since January 2020. But nobody spoke about it. Because analyzing it, might cause grave consternation in the public. That is one explanation. But far more likely, because the masters behind this “new” bomb strictly forbid (under threats) making it public.

On August 7, 2020, Thierry Meyssan reports, “It is not known what weapon was used. However, it has already been tested in Syria since January 2020. It is a missile with a tactical nuclear component in its warhead that causes a smoke mushroom characteristic of nuclear weapons. It is obviously not an atomic bomb in the strategic sense. The weapon was tested in Syria on a plain in the countryside and then in the Persian Gulf on the water against Iranian military vessels. This is the first time it has been used in an urban environment, in a particular environment that made the air blast and vibrations reflect off the water and the mountains.”

See video showing the striking similarity between the blasts in Syria and the blast in Beirut: https://www.youtube.com/watch?v=21JmY1ezAi4
https://youtu.be/21JmY1ezAi4

Was this another test with purpose, like those in Syria? Applied to an archenemy, Hezbollah? – And at the same time destroying Beirut and plunging Lebanon into further turmoil, making it even more vulnerable for a take-over?

One is reminded of Wesley Clark’s interview of March 2, 2007 with Democracy Now’s Amy Goodman, where the US General and former Europe Head of NATO, listed Lebanon among the seven countries that had to be “taken out’. See video: (https://www.youtube.com/watch?v=WGkSNAHqpJM – taking out seven countries, about from min 2:30).

Is the Beirut blast one more test for things to come, after the covid “lockstep scenario”? The permanent ever stronger repression of western governments to keep people separated by social distancing and controlled by so-called “contact tracers” – waiting for a vaccine which they hope will allow the masters inserting a nano-chip in any form or shape, that would integrate with the body and permit permanent surveillance of movement and everything from health records to bank accounts.

Is the Beirut blast just a cog in the wheel to a more important objective; One or New World Order? Mind you, we are already there. The “Lockstep Scenario” is just the fine-tuning mechanism.

Expect mass protests – they have started already in Germany, notably in Berlin on August 1, 2020, with 1.3 million people taking to the streets, protesting against the German Government’s ever more repressive corona measures and restrictions. Numbers and size of such protests may increase over time as the governments do not seem to relent, as if they were following a regime of “higher orders”. Is it conceivable that the “new’ weapon may be applied to western cities of strong social upheaval, and then spread to enemy cities in Russia and China?

Large cities with millions of people could easily be destroyed with the “new” weapon, with the click on a remote bottom – like e-video game, and with none of the perpetrators of such horror destruction hurt. The people on the ground are powerlessly exposed to sudden and slow death. Wasn’t that the case for Hiroshima and Nagasaki in 1945?

And let’s not forget – the US shortly after WWII planned to nuclear-bomb 66 Soviet cities, mind you, this was when the US and the USSR were still allies – see “Wipe the Soviet Union off the Map” – https://www.globalresearch.ca/wipe-the-ussr-off-the-map-204-atomic-bombs-against-major-cities-us-nuclear-attack-against-soviet-union-planned-prior-to-end-of-world-war-ii/5616601. The tactics of such plans are still intact – and shelved, could be revived at any moment. Of course, modernized and with today’s technologies.

Beirut is a sad-sad attack – with a story that is not as simple as the official version would like you to believe. Be aware!

Peter Koenig is an economist and geopolitical analyst. He is also a water resources and environmental specialist. He worked for over 30 years with the World Bank and the World Health Organization around the world in the fields of environment and water. He lectures at universities in the US, Europe and South America. He writes regularly for Global Research; ICH; New Eastern Outlook (NEO); RT; Countercurrents, Sputnik; PressTV; The 21st Century; Greanville Post; Defend Democracy Press; The Saker Blog, the and other internet sites. He is the author of Implosion – An Economic Thriller about War, Environmental Destruction and Corporate Greed – fiction based on facts and on 30 years of World Bank experience around the globe. He is also a co-author of The World Order and Revolution! – Essays from the Resistance. Peter Koenig is a Research Associate of the Centre for Research on Globalization.

Why You Should Invest in Rental Properties

How To Start A Podcast: A Step By Step Guide

Am I Eligible for a PI Settlement Loan?

How Reviews Impact Your Sales

4 Things You Need to Build a Supplement Brand

How Data Collection in Pharma Is Evolving