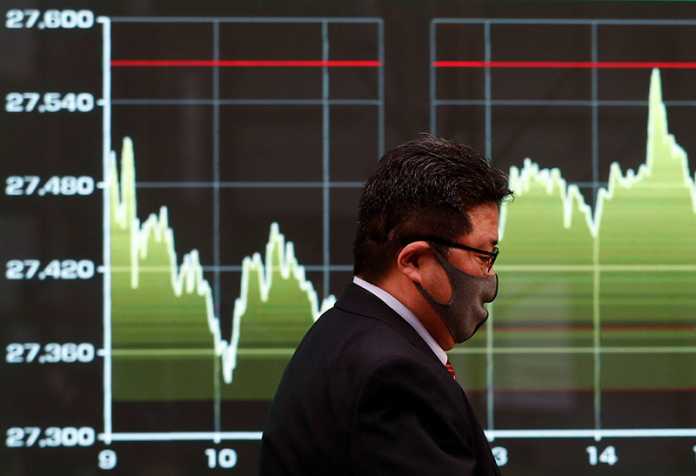 Economic recovery has proved elusive in Asia, thanks to the West’s pandemic mismanagement and vaccine inequality. The Fed’s impending tapering will add to the woes.

On Friday, Jay Powell suggested that the US central bank had met one of the two goals it had sought to achieve before reducing its monthly $120 billion asset purchase program.

In the closely-watched speech at the Jackson Hole conference, the Fed chair said that ‘substantial further progress’ test has been met for inflation. There has also been clear progress toward maximum employment.”

The majority of the Fed officials believe it is appropriate to start “tapering” the bond-buying program in the fall.

Why the Fed needs to taper

Instead of responding to the WHO’s coronavirus warnings in January 2020, the Fed, like the Trump White House, took its time. It awoke only after the WHO’s declaration of the global pandemic two months later.

On March 20, 2020, the Fed slashed its short-term benchmark interest rate to near zero. To provide additional stimulus, it began purchasing $120 billion monthly in Treasury and mortgage securities.

While US headline and core inflation are currently above 5%, significantly higher than the Fed’s 2% inflation target, recent jobs report suggests the recovery is broadening. Yet, the big picture is mixed.

While Powell was speaking, the White House more than doubled its forecast for annual inflation in new projections, as supply-chain disruptions continue to put upward pressure on prices, due to the pandemic and the Delta variant.

The consumer-price index is now expected to steady at 2.5% in fall 2022. Yet, critics believe the Fed is stoking still another real estate price bubble that threatens to wipe out home equity.

The cold reality is that the longer the Fed maintains its excessively loose monetary policy, the more it is generating excess liquidity, which is fostering inflation. That is likely to prove costly in the future. Over a decade of ultra-loose fiscal and monetary policies have put the global economy on track for a slow-motion train wreck.

Officially, the Fed’s dual mandate is to focus on price stability and full employment. International implications remain a secondary consideration.

What is the strategy of the People’s Bank of China (PBOC) toward the Fed’s tapering? The simple answer: In the short-term, cautiously accommodative. In the medium-term, cautiously neutral. If warranted, PBOC is likely to inject liquidity to avoid tightening of monetary conditions.

Amid the rising political discontent, Premier Suga is battling for his political future. Inflation remains close to 0%, with interest rate at -0.1%. The maneuverability of the Bank of Japan’s is limited. Sovereign debt is close to 270% of GDP and rising.

Two days before Powell’s speech, the Bank of Korea raised its interest to 0.75%, as the first developed economy to do so in the pandemic era. It was necessitated by financial risks pressuring the economy, including heated house prices and rising household debt.

The move is not likely to be followed by Asia’s other central banks.

Instead of the much-anticipated recovery, Southeast Asia is struggling with the Delta variant and vaccine inequality, which have resulted in slower vaccination rollouts. Hence, the lowered GDP forecasts across the region.

With policy rates at a historical low, Southeast Asia will soon have to cope with the Fed’s impending rate hikes. Since early spring 2020, all regional economies have been busy cutting their rates.

While the rates have almost halved in both Vietnam (interest rate 4.00) and Indonesia (3.50), their central banks continue to have adequate policy space. In turn, the central banks of the Philippines (2.00) and Malaysia (1.75) still have significant space available. By contrast, Thailand’s (0.25) options are now more limited.

Foreign-exchange fluctuations reflect the new realities. Before the pandemic, the Thai baht was still the strongest-performing regional currency. But it has plunged more than -10 against the US dollar.

Malaysian ringgit and the Philippine peso (about -4%) remain somewhat exposed, whereas Singapore dollar and Indonesian rupiah (about -2%) are better positioned. Vietnamese dong has actually appreciated (+1%) relative to the US dollar, thanks to foreign-exchange truce with Washington.

Even today, the US economy, central bank and dollar serve as the yardsticks for international performance. Yet, the Biden administration’s multi-trillion-dollar infrastructure investment initiatives ignore the country’s dire fundamentals.

US sovereign debt is close to 135% of GDP and climbing ever faster. Persistent budget deficits will cause the federal debt to double in size over the next three decades.

In the past four decades, the strength of the greenback, as measured by the US dollar index (DXY) has progressively weakened, despite the Fed’s hikes. After Paul Volcker’s massive rate hikes in the early 1980s, the index peaked at 160. In the early 2000s, it was barely 120. In the past year, it has lingered around 89 to 95 (Figure). 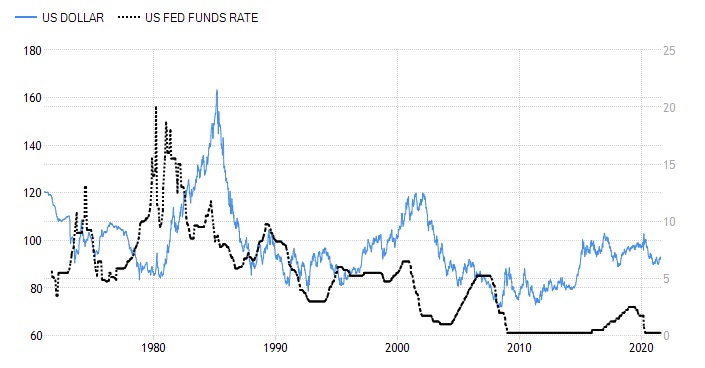 Unsurprisingly, Powell’s comments on Friday penalized the dollar index by 0.4%. It was down 0.9% for the week; the sharpest decline since early May. As global growth prospects are fueled by large emerging economies, the global economy is being held hostage by a graying, excessively indebted single currency.

For some time, data by the International Monetary Fund (IMF) has suggested that the dollar may be losing its draw as a reserve currency. The longstanding debate on the US dollar as the world’s reserve currency will intensify in the coming months. Perhaps it made sense in 1945, when the US economy still accounted for half of the global economy. But today those days of wine and roses are way gone.

We are navigating in unchartered waters with few life boats, all of which are leaking.