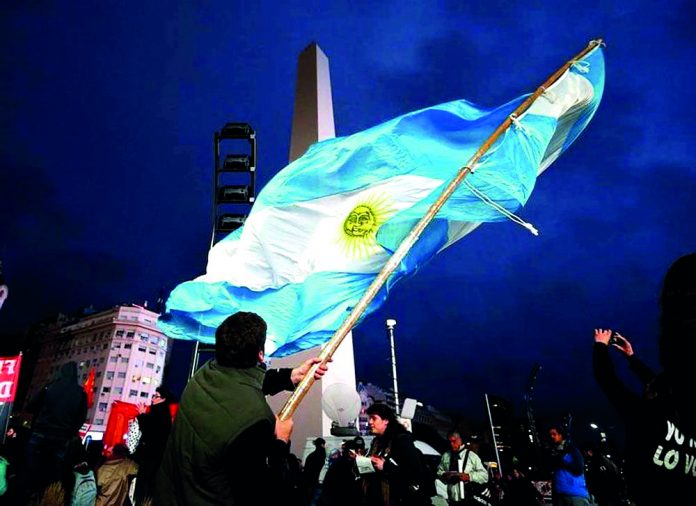 Since Macri took the office the Argentina president on 2015, inflation has accelerated and chronic job loss was reported. Despite the record of receiving $56 billion loan from the IMF, it did not go to the real economy of Argentina but to the global bankers and investors to whom they owe their debt. What’s next to Argentina after being indebted to the US vulture capitalists?

On August 12, 2019, financial markets in Argentina crashed. The stock market contracted 38% in just one day. The currency, the Peso, fell 20% after falling as low as 30% and recovered to 20% only when Argentina’s central bank raised its interest rate to 75%. Watch next for bond interest rates, both government and corporate, and especially dollarised bonds which Argentina has loaded up on in recent years, to freefall as well.

What’s going on in Argentina? What’s likely to happen next? And what do the events in Argentina have to do with falling financial asset prices—i.e. stocks, currencies, derivatives, commodity futures, real estate prices, etc.—now underway globally as well?

The precipitating cause of yesterday’s crash in Argentina stocks, peso, bond rates, etc. was the primary presidential election results over the weekend. The election was a preview for the general election that will happen this October. Macri, the current president, a businessman whose election in 2015 was assisted by US interests, lost heavily to his challenger, Alberto Fernandez. Fernandez got 48% of the vote; Macri only 32%. A gap that is likely insurmountable for Macri. It’s almost certain now that Macri will now lose in October. That prospect has global bankers and investors quite worried. For Fernandez is associated with the Kirchner government that held office prior to Macri from 2002 to 2015, and that government refused to pay US hedge funds and other investors the exorbitant rates on Argentina bonds they demanded ever since the last crisis in 2001-02.

Dr. Jack Rasmus is author of the forthcoming book, ‘The Scourge of Neoliberalism: US Economic Policy from Reagan to Trump’, Clarity press, October 1, 2019. He blogs at jackrasmus.com and his website is http://kyklosproductions.com. He tweets at @drjackrasmus and hosts the Alternative Visions radio show weekly on the Progressive Radio network.