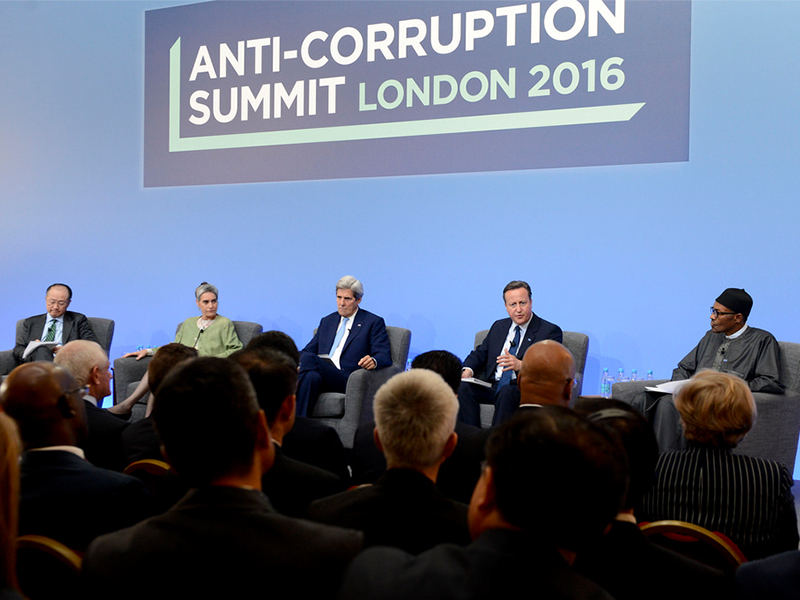 No inclusive growth is conceivable without success in Nigeria’s anti-corruption drive. Today, that struggle is increasingly global.

In mid-May, the world’s first anti-corruption summit took place in London. During the event, the chairman, UK Prime Minister David Cameron was caught on open mike disclosing to Queen Elizabeth II that attendants included some “fantastically corrupt” countries, including Afghanistan and Nigeria.

While most advanced economies in the West score relatively high in perceived corruption indexes, many continue to serve as conduits for ill-gotten wealth.

“I’m not demanding an apology,” Nigeria’s President Muhammadu Buhari said. “I am demanding a return of assets.”

It was precisely the right way to hit back after Cameron’s “gaffe.” But as Buhari added, ‘repatriation of corrupt proceeds is very tedious, time consuming, costly and entails more than just the signing of bilateral or multilateral agreements.”

The Rise of Illicit Financial Flows

While most advanced economies in the West score relatively high in perceived corruption indexes, many continue to serve as conduits for ill-gotten wealth. For instance, Britain ranks high in transparency rankings but it has a key role in the facilitation of corruption abroad. Also, some 100,000 properties are reportedly owned by anonymous shell companies in England and Wales.
Illicit financial flows tell the story. According to Global Financial Integrity (GFI), each year over $800 billion in illicit trade exits developing countries. These illicit financial outflows are growing at an average annual rate of 6.5%; that is, twice as fast as global growth. And they have more than doubled in the past decade, to about $1.1 trillion in 2013. In global terms, Sub-Saharan Africa accounted for almost 10% of the total.

Nigeria belongs to the top-10 source economies of illicit financial outflows. Between 2004 and 2013, the country lost a cumulative $178 billion, while South Africa’s losses soared to $209 billion. The list is topped by China, which bled almost $1.4 trillion in the same time period.

Anti-corruption Campaigns from West to East

All major advanced nations have suffered from corruption in the course of their economic development. Nor is the struggle against corruption, patronage and nepotism over, as evidenced by a slate of scandals of Illinois governor Rod Blagojevich, ex-French President Nicholas Sarkozy, former Italian PM Silvio Berlusconi, German President Christian Wulff and so on.
There are some developing countries that have been successful in struggles against corruption. In the most recent Corruption Perceptions Index, Singapore and Hong Kong rank 8th and 18th, respectively – but not without a bitter and tough struggle.

In the most recent Corruption Perceptions Index, Singapore and Hong Kong rank 8th and 18th, respectively – but not without a bitter and tough struggle.

In Singapore, corruption was rampant through the colonial era well into the 1950s. Reforms came only after the nation’s first Prime Minister Lee Kuan Yew moved the anti-corruption government agency to his office so that it would be independent from the police force and other government agencies.

Today, Hong Kong is one of the world’s most prosperous financial hubs. That was not always the case. In the 1970s, Hong Kong was still one of the most corrupt cities in the world. Reforms came only after huge popular protests, which led to the launch of an independent anti-graft government body with wide investigative powers.

China’s anti-graft campaign draws from the successes in Singapore and Hong Kong. Yet, these cities are relatively small relative to China where mega-cities have more than 20 million people. Led by the tough and hands-on Vice-Premier Wang Qishan, China’s top anti-graft body, the Central Commission for Discipline Inspection (CCDI), also enjoys substantial independence.

In 2013, the CDDI began its campaign with regional inspections, starting with Jiangxi, Inner Mongolia, Chongqing, and Hubei. The investigations resulted in the sacking of several regional leaders. After the high-profile sacking of former Chongqing party chief Bo Xilai, the campaign focused on the patronage networks of former security chief Zhou Yongkang.

A second round of inspection teams were dispatched to Hunan and Guangdong, while provincial chiefs were detained in Yunnan and the coal-producing Shanxi experienced a “political earthquake”. Then came the fall of the “four big tigers”: General Xu Caihou; Zhou Yongkang; Ling Jihua, former senior aide of Hu Jintao; and Su Rong, the party’s vice-chairman. Concurrently, investigations expanded to media, government agencies, and state-owned enterprises.

After last summer’s market meltdown, anti-corruption investigations were stepped up in financial institutions.

Like in Singapore, Hong Kong and China, President Buhari has had to track stolen funds all the way to foreign countries, including the US, UK, Switzerland, France and certain other European jurisdictions. World Bank has released lists of those that have looted public funds in Nigeria. Already in 2013, central bank’s former governor, Sanusi Lamido, showed that Nigeria lost a billion dollars monthly to diversion of funds under President Jonathan.

As elsewhere, the real challenge will be to prosecute those who are corrupt, irrespective of their economic, political, ethnic or religious background. If the anti-graft campaign is not perceived as fair, the result will be political turmoil, social polarisation and economic volatility, as exemplified by Brazil where the prosecution and judges have extensive ties with political opposition.

In the short-term, the anti-corruption campaigns can contribute to economic and political uncertainty. However, corruption is corrosive to economy and fatal to nation’s moral fibre. Overcoming corruption will only make the nation stronger, growth more resilient and living standards higher.

The original commentary was published by BusinessDay (Nigeria) on May 30, 2016

Dr. Dan Steinbock
is an internationally recognised expert of the nascent multipolar world. In addition to advisory activities, he is Research Director of International Business at India China and America Institute (USA) and Visiting Fellow at Shanghai Institutes for International Studies (China) and the EU Center (Singapore). He was born in Europe, resides in the US and spends much time in China and Asia. For more, see www.differencegroup.net