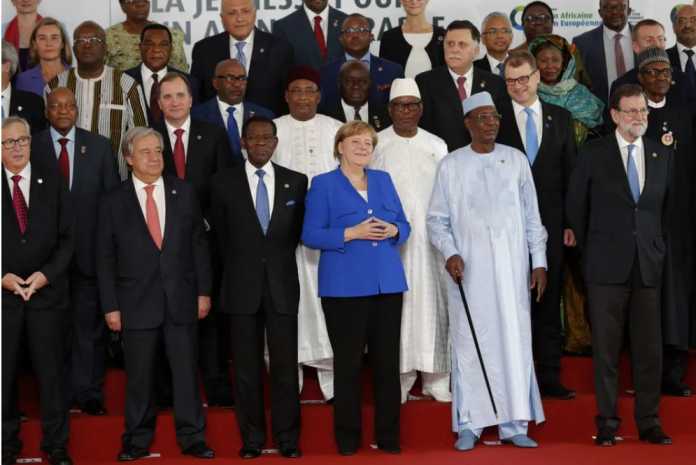 Summits between the African Union and European Union are essential to setting the big picture agenda of contemporary Africa-EU relations. They also carry weight because of their potential to ensure that African perspectives are also prioritised within the relationship.

Over the past six decades, trade and development has constituted the main basis for interaction between African countries, the continent’s institutions, and the EU. The EU remains an important actor in Africa despite the growing interests of other actors such as China, Turkey and the US among others.

To negotiate and facilitate favourable terms of engagement, summits are important – even essential – diplomatic sites for African leaders. But they are not without their tensions, the main one being the fact that the power balance between the two blocs is wholly unequal.

The EU’s economic and political power in global relations far exceeds Africa’s. Consequently, the EU’s priorities dominate key agreements. Even at the inception of what is now the EU, in 1957, the terms of engagement with African countries was determined without consultation with Africans themselves. The EU has refused to check the power hierarchies that keep alienating Africans. The difference in approach to dealing with the pandemic further underscores these tensions.

The persistent power inequalities do not bode well for supposed change. This is why the latest summit presents an urgent opportunity for the EU to convince African decision makers that – this time – the desire for change can be followed through by action.

The EU of course must agree with the idea that African priorities matter and that they can be mutually beneficial for Africans and Europeans if given a chance.

This attitude benefits the EU’s own aims as a global actor while enhancing Africa-EU relations too.

Summits – what are they good for?

The first summit between the EU and African countries was held in Cairo, Egypt in 2002. It was held on the eve of the formation of the African Union, which replaced the Organisation of African Unity.

The summit marked an important milestone in Africa-EU relations.

First, it was engaging Africa as a region outside of the transnational African, Caribbean and Pacific grouping. Significantly, it provided the opening to move the relationship beyond trade and development cooperation. These had reinforced colonial patterns of interaction.

This period aligned with changes in both blocs. In Africa this was happening through the formation of the AU. For its part the EU was developing its own foreign policy practice. This was set out more clearly in its 2003 European Security Strategy.

Underpinning the move towards continent-to-continent engagement was the attempt to reconfigure relations. This was to ensure that the Africa side had a say in defining priorities within the relationship. With the creation of a new continental institution to set collective priorities, the summit reinforced the idea that the power asymmetries that had previously defined relations were coming to an end.

Yet, the opening provided by the summit was not fully realised. Beyond the broader issue areas, the relations remained more or less the same.

The opportunity to revisit the status came once again at the second summit in Lisbon, which launched the Joint Africa-EU Strategy, supported by an Action Plan 2008-2010.

The strategy was more political than previous agreements. It focused on peace and security, democratic governance and human rights, while reinforcing trade and regional integration. It was supported by a narrative that promised greater accountability to citizens and not just decision makers.

The idea seemed to be that this was a partnership of equals – that the problem of asymmetry had been confronted.

But not much changed as a result of this so-called people-centred partnership. The strategy was all but abandoned as a governance framework for Africa-EU relations. The EU appeared to favour the trade and development focused 2000 Cotonou agreement which had gained precedence in the context of existing EU-ACP relations.

Despite the minimal advancements in the scope of the relationship in Cairo and especially in Lisbon, the promise of a true continent-to-continent relationship seemed in the rear-view mirror.

A new dimension was included in 2010 at the third Africa-EU summit, held in Tripoli, Libya. This was the formal integration of civil society into the process of policy development and implementation.

The summit also endorsed the second Action Plan (2011-2013). But the process of getting there brought to a head some of the simmering tensions between the two sides.

For example, the AU refused to sign elements in the second declaration related to climate change commitments. It wanted these deferred. This pushback came at a time of increasing assertiveness on the part of Africa vis-a-vis the EU. Other examples included the AU’s resistance to the EU’s insistence that African countries sign up to the Economic Partnership Agreements. For some AU states, the EU’s tactics to force this issue illustrated the maintenance of hierarchical colonial relations.

Over the years, summits have been supported by the thematic ministerial-level and annual meetings between the European Commission and the Africa Union Commission as well as ad hoc delegations between European and Pan-African parliaments. These dialogue sites in between summits should have helped deepen trust and moved both sides towards a joint agenda.

However, underpinning the resistance to change is the architecture of engagement which has been forged in colonial hierarchies which unfortunately persist.

Yet, the current state of affairs would suggest they have only reinforced the power asymmetries in the relationship.

As the partner with “special” relations with African countries, summits with the EU are especially important as sites for the articulation of African positions and priorities – African agency. Yet, the perception that the EU does not take seriously its own calls to reset or “overhaul” the Africa-EU relationship has created the space for new and close relationships with other actors.

One example of this is the EU insistence on Economic Partnership Agreements, which African countries have consistently resisted on the basis that they undermine Africa’s own regional economic integration plans. This, however, does not dissuade the EU from making them, at times, a condition for further engagement.

Recently, the EU’s approach to the governance of the COVID pandemic is at odds with Africa’s, reinforcing the perceptions that African priorities are either ignored or downplayed.

Reflecting on the summits in Brussels and Abidjan in 2014 and 2017 respectively, this desire for reset remains unrealised – the discussions surrounding this summit feel very much like déjà vu.

Arguably, the potential of the typical Africa-EU summits as sites to deepen the continent-to-continent relationship may be waning.

This article was originally published in The Conversation on 17 February 2022. It can be accessed here: https://theconversation.com/africas-relations-with-the-eu-a-reset-is-possible-if-europe-changes-its-attitude-177250

Luis Mah is a Lecturer at the MA and PhD in the Program in Development Studies at the Lisbon School of Economics and Management (ISEG) – Universidade de Lisboa. He is also an Associate Researcher at the Center for African, Asian and Latin American Studies (CESA) also at ISEG-Universidade de Lisboa. He formerly led the United Nations Millennium Campaign (UNMC) and the Global Call to Action against Poverty (GCAP) in Portugal. He also worked as a Policy Analyst on Ethical Finance in the Portuguese NGO Oikos and was a board member at the Portuguese NGO TESE as well as at the Portuguese chapter of Transparency International (Transparência e Integridade). He holds a PhD in Development Studies from LSE – London School of Economics and Political Science (London, 2004), a MA in Political Science from Yonsei University (Seoul, 1996) and a Licenciatura in Social Communication from Universidade Nova de Lisboa (Lisbon, 1993).